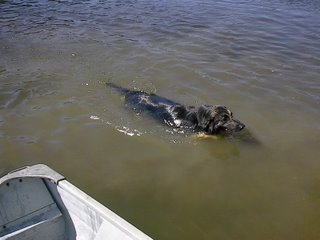 ~ Obi, in better form and on a sunnier day ~

Took our dog Obi swimming at the lake, one of those activities that “look better on paper”, which is to say it was a large pain in the butt. First, the weather was downright cold, the wind whipping off the water as if to emphasize the lack of sun. Looks like the whole week is crashing weather-wise, an unfortunate turn of events, but one that can be partially solved by books and beer since they're impervious to the natural deflation a cloudy day brings.

Second, Obi was always looking for trouble, never content to merely sit & enjoy the whipping wind and chill temps. He scoured the landscape not for its natural beauty but for potential targets to chase after. I had a Guinness to warm me up, and it occurred to me that Minnesotans drinking great quantities of alcohol would be better off just moving to Florida. Garrison Keillor boasts of the toughness of stalwart Minnesota-winter tested souls but how much of their heroism is due to the golden lager? Enquiring minds want to know.

Obi's swimming talents leave much to be desired. “Whale on the beach” was a derisive chant boys used to yell at generously fleshed young women during Spring Break, but Obi looked far more the part on this particular beach. His fur was slick and black as an oil spill and he flopped about out in the water in a way that would be humorous if I wasn't worried about him drowning. He's fastidious too. It’s funny that he won’t swim in just any particular body of water. This one is cleaner and clearer than average so I guess it met the Obi test.
Posted by TS at 8:03 PM