From the Islam as the Religion of Peace Dep't

A novel that glories in the imagined assassination of Pope Benedict is a bestseller in the bookstores of Istanbul.

And Turkey is supposedly the one semi-sane Islamic nation, the one most friendly to Christianity. Meanwhile, Brigitte Gabriel mentions how a Muslims Against Terrorism rally in D.C. was opposed by two of America's biggest Muslim groups and ended up drawing only about fifty people, "most of whom were Christians and Jews". Oy vey. My sense is that if they can't protest within the safety of America, then it ain't gonna happen anywhere else.

From Ms. Gabriel, a Lebanese Christian who considered Jews an enemy until she experienced the kindness of Israeli soldiers and hospitals who saved her life from Islamic jihadists (click to enlarge): 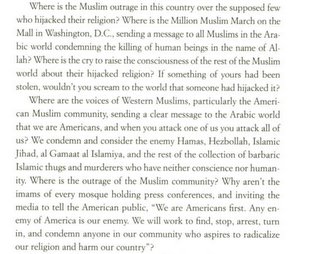 Human nature being what it is we either lapse into paralyzing self-criticism or a complete lack thereof. Islamic culture obviously falls into the latter, while we in the U.S. tend towards the former, or at least the MSM. Even children's books steadily beat the drum that Christianity is to either be ignored or feared and that America has more flaws than virtues. The natural result of that constant barrage is that Christianity will be further marginalized and that Americans will devalue America.
Posted by TS at 9:31 AM