News of our Week 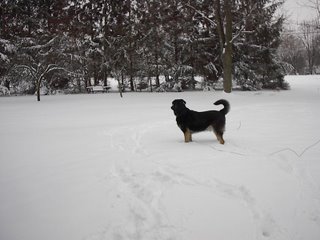 The big news around our homestead this week was the Obi emo-a-thon (short for “emotion-athon”). The “bright” dog, so labeled by a vet assistant, had swallowed eight to twelve inches of dental floss. I have a hunch he could've eaten far more without ill effect since he routinely “dumpster dives” and consumes the contents of indoor garbage cans. There’s often been floss in this particular can but it was only this time I’d caught him and I sense he's like the drunk driver who got caught the seven-hundredth time he'd driven drunk. We tried to induce vomiting with hydrogen peroxide but he’s a big dog and is able to fend off bodily assaults that would’ve had smaller dogs puking their proverbial guts out.

Two days later, after noting a rare loss of appetite and an episode of (belated) vomiting, we took him to the emergency vet. They took x-rays of our dog and our wallets and found both with excesses that needed to be purged. Obi’s was a suspicious “gas pocket”. Now, since the colon is the natural environment of gas, it seemed a stretch even at the time that he should be kept overnight for observation and fluids. Reports have it that he barked quite loudly and crisply at 3am. He seemed nonplussed at all the fuss. “Why am I here?” asked Admiral Stockdale in the ‘92 vice-presidential debate and one imagines Obi saying the same thing with more cause. The crisis was over as soon as it’d begun and a day later we were laughing about the “$600 fart”. (I was laughing because I wasn’t paying for it; Obi's officially my wife's dog.)

But fortunes changed as they often do. Our laughter was shortlived after receiving a disturbing phone call a few days later. The vet had sent the x-rays to a radiologist as they routinely do. The radiologist noticed an alarming mass which the emergency room vet had not the training to have noticed. An ultrasound was called for, and Obi was taken to his regular vet for that. This vet said the large mass was next to either the spleen or liver – only a specialist could tell for sure. Naturally we assumed it was a tumor as that seemed the likely explanation though son Aaron came up with an extremely plausible one: “it’s probably a sock.”

So Friday my wife took him to the specialist for a second ultrasound and to possibly take a biospy. But about 11:15am she called me at work sobbing jubilant tears -- the mass was just part of his spleen! It was not only beyond our expectations it was more than we dared hope for. German Shepherds have larger spleens than normal, and apparently Obi’s had “folded over,” at least during the xray & ultrasound, making it look like there was a foreign mass next to a smaller-sized spleen.

The night before when all was dark, it was touching to hear of my wife's yearning for clarity with respect to animals and Heaven. If she could know for sure then Obi’s death, either now or in the future, would be bearable. I was touched by it in part because it was evidence of her reverence for truth; she would not believe a lie only to give her comfort (though there is no evidence it is a lie and that animals don't go to Heaven.) But how could God not be pleased by her seeking truth? How many determine their doctrine or morals by what they can personally bear? Perhaps some small personal revelation is in the offing but if it is not it’s all for the good. In her is the familiar struggle between faith and reason and I was proud that she abandoned neither reason or faith. Real faith works its way through the fog of cloudiness.

My own fog is how Heaven can be truly heavenly while being exclusive rather than inclusive. If something or someone is missing, how can there be perfect happiness? One can look at it such that the Beatific Vision is like a drug, something that takes our mind off everything else. In that sense looking at God is like being so drunk with love that you scarcely notice anything else. But that is proven blatantly false by the saints, who intercede for us poor earthly saps even while enjoying the divine vision.
Posted by TS at 10:08 PM