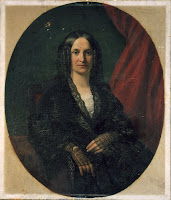 I used to live right next door to Worthington, Ohio and belonged to the parish there. The city was named for Thomas Worthington, an early governor of Ohio and United States Senator. I didn't know about his daughter:

"Among the least celebrated to the contemporary visitor but certainly among the most important persons in the history of the Cincinnati archdiocese is Mrs. Sarah Peter, who died in 1877. The eldest daughter of Thomas Worthington, first governor of Ohio and one-time U.S. Senator, Mrs. Peter converted to Catholicism following the death of her second husband. Her life is a series of good works benefitting both civic, cultural and religious institions in Cincinnati where she finally settled. The Church remembers most her being responsible for bringing five orders of religious women to the area - the Sisters of the Good Shepherd, the Sisters of Mercy, the Sisters of the Poor of St. Francis, the Little Sisters of the Poor and the Sacred Heart nuns. She is also responsible for the presence of Passionist priests in Cincinnati.

"As a result of her good works, Mrs. Peter has been called the mother of the Church in Cincinnati. Some even consider her a candidate for canonization."
--St. Joseph Cemetery Association.

She also had an appreciation for art and nature. An excerpt from one of her letters, from the Memoirs of the Life of Mrs. Sarah Peter By Margaret Rives King:

More tidbits: excerpts from a book about her using a handy posting option now offered by Google Books -- this next is a letter written by her and concerns her opening up to Catholicism (she was an Anglican at the time):

Memoirs of the Life of Mrs. Sarah Peter By Margaret Rives King: ""

Memoirs of the Life of Mrs. Sarah Peter By Margaret Rives King: ""
Posted by TS at 10:27 AM