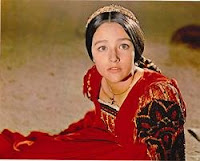 I think it behooves to adorn this self-indulgent post with a picture of Olivia Hussey because the right picture can really add to the blog reader's experience. The perfect picture can lend gravitas to a post in which that is otherwise lacking. I'm not sure Hussey's is the right picture but it's the right one right now. I'm sure all of my male readers will agree.

Reveries of the earliest extant poem extrudes, the ur poem, the poem that launched a thousand bad poems, many of which now live in the deep recesses of my computer and are double-triple password-protected in order to prevent posthumous viewings since many were of a lascivious nature such that I thought I could write the lust out of me, wring out the heavy burden of semen much as the anger-besotted man thinks he can beat the anger out by wailing on his dog.

But it all started off in primeval innocence, cursive script on a Rainbow writing pad:

I want to write
a beautiful sight
I love my month
called June!

Being born in June I apparently felt a proprietary interest.

Later I kept a diary for three months. Like many relationships it ended for ill; the last page was full of recriminations and blame and accusations because it seemed to be all duty and I grew to hate the burden, an irrationality that seems incredibly puzzling now. What did it matter whether I kept one or not? I mean to go back to that three month 5-yr diary and try to piece together what frustration a kid could've felt towards something as benign as a diary. Perhaps it was merely that the cover felt like a binding contract: 5 Year Diary. Perhaps if it was called A One Month Diary I could've felt more at peace, knowing the goal was manageable.

Ironic too given that now, without any personal stricture, vow or sacrifice, I've written a quadzillion blogposts over the past seven years, though admittedly most of an essay heuristic rather than diaristic one. So too does my home-grown journal grow, although perhaps the secret is updating it weekly rather than daily.

Journals and diaries seem important if only because it's the only time you ignore the censor, perhaps not the best thing to do since the Id is such a thoughtless bloke, but sometimes art can spring only when the superego's sleeping due to fatigue incurred from his tiresome mission.

I normally write on Friday nights but by Thursdays the words begin to burst their houses and the rain falls on just thoughts and unjust thoughts and I feel the duty to express them, to air them, in part just because I like words, I like the cut of their jib, I like the fact that they have long histories, I like that they are like rivers and always have a mouth, a beginning, even if we don't know when exactly or who first uttered it.
Posted by TS at 9:16 AM

I made the mistake of starting to keep a diary in my early teenage years, when I had nothing to say and no original thoughts and every sentence started with "I". The diary came to a sticky end: I discovered my sister reading soon after I'd acquired a boyfriend, slapped my sister for the first and last time, and (probably the only wise decision I'd made so far in regard to journaling) threw the thing away. I haven't been able to keep a physical diary since, although I guess that I could retrace my past four years based on blog entries.

I made the mistake of starting to keep a diary in my early teenage years, when I had nothing to say and no original thoughts and every sentence started with "I".

Same in my case, only I began each entry with "I ate...". Apparently I thought my diet would be of some long-term interest.

I kept a diary for about seven years. No one was ever interested in reading my scribbles. There are about twenty notebooks now that I have to burn before I die.

Posting a picture of Olivia Hussey is always the right thing to do.