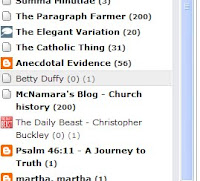 Through the miracle of Bloglines I was alerted to fresh magic from Steven Riddle & Betty Duffy today. I'm semi-fascinated that Betty's psuedonym is so plain; I suspect it means her real name is not and that for her it's a relief to have a name you don't have to spell. Betty's latest post was funny and I admit to a hypochondriacal streak far stronger than hers.

Lately I've been concerned by high blood pressure but when the nurse took my BP for the yearly physical it was 124/80, not 140/90 as it was on the BP machine just outside the nurse's office.

"Do not trust that machine!" she said.

But contrary to the "white coat disease" where your BP goes up higher when being measured by a medical professional, I find the touch of a woman nurse calming. So now, hypochondriacally, I wonder if female nurses artifically lower my pressure.

______
I'm really loving the comments on this bible blog post, even if it's rank stereotyping and helps further divide the church by placing labels on people. It's all so wrong. But see my blog title. I also find, to my dismay, that I sometimes like talking about bible versions even more than reading one.

______
Conservative pundit Laura Ingraham sees the proliferation of social networking sites like Facebook & Twitter as a negative, asking why it is that we don't live more instead of going online and dishing out minutiae like what we ate today. Ingraham had on an expert saying that online communication is not nearly as therapeutic (if you will), as the real thing. We are embodied and all that.

Sometimes it does seem like the vacation triplogs got out of hand because I was writing more about vacation than actually vacationing, in fine cart-before-the-horse fashion. But then I enjoy writing so much that it could be said to be part of the vacation, an excuse and inspiration to write. I find it calming. And it probably lowers my blood pressure.
______


I watched the Obama speech last night with the fast-forward button handy in order to ward off pointless applause. The high point was someone yelling something after Obama said no health care for illegal immigrants ("You lie," it turned out to be) and I found the frowning faces of Nancy Pelosi and Joe Biden particularly compelling as any burst of true emotion would be in an otherwise contrived affair. Speeches like this one, before a joint session of Congress, have a sort of Academy Awards flair to it, at least for political junkies. While she was glad-handing down the red carpet I kept waiting for someone to ask Hillary who she was wearing. Disappointing was the lack of Supreme Court justices, wearing their sober black and sitting on their hands. It's like American Idol without Simon. I like how they act apolitical when the opposite is mostly true.
Posted by TS at 11:13 AM

Writing isn't something one does for work or for relaxation. It's something one just does, like breathing. Be more worried if you lasted the whole holiday without writing anything!

Be more worried if you lasted the whole holiday without writing anything!

i oft wonder what we are going to think of the whole networking over the ether in, say, ten or twenty years from now. all i know is that i'm grateful to GOD that we didn't have it when i was still in college. that's all i'm saying.

Indeed Smock. The networking sites can eat up an incredible amount of time.

Maybe networking sites will turn out to be the defining fad of "the Noughties," with all of us looking back on it the way the "Children of the 80s" look back on an MTV which actually played music videos.

On the other hand, MTV never tried to be (small c) catholic the way Facebook is. Looking over my little brothers' shoulders, I see that they can take quizzes, post videos, chat with contacts, micro-blog, run virtual farms, and play all sorts of games (including a blatant rip-off of Pacman called "Wakawaka"). That is, you can't watch music videos all day, but you can certainly hang out on Facebook all day. It's a cyber-hydra with siren appeal--and Odysseus is getting waylaid!

um yeah, it's a time vacuum, no doubt; but wasting TIME is totally not what i would worry about. i shudder to think of what would have been POSTED, only to come back years later to bite me in the proverbial butt. eggads!

TS, I was going to leave a comment but an email just came in informing me that someone has written on my FB wall, so...later.

That's why "a pseudonym is your friend"!

Elena of Tea at Trianon recently linked to an article about Facebook's power to ruin friendships: