The eleventh Clement to ascend to the throne of Peter wrote a moving prayer in 1721, part of which is excerpted below:

"My God, I believe in You; strengthen my faith. All my hopes are in You; secure them.

I love you; teach me to love You daily more and more. I am sorry that I have offended You; increase my sorrow.

I adore you as the author of my first beginning. I aspire after you as my last end. I give you thanks as my constant benefactor. I call upon you as my sovereign protector.

My God, be pleased to conduct me by Your wisdom; to restrain me by the thought of your justice; to comfort me by your mercy; to defend me by your power." 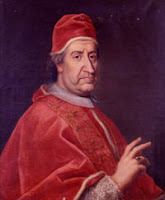 It prompted me to read more about him, and I found that he's the pope who made tomorrow's feast of the Conception of the B.V.M. a Holy Day of obligation.

More from the Catholic Encyclopedia entry:

Clement's pastoral vigilance was felt in every corner of the earth. He organized the Church in the Philippine Islands and sent missionaries to every distant spot. He erected Lisbon into a patriarchate, 7 December, 1716. He enriched the Vatican Library with the manuscript treasures gathered at the expense of the pope by Joseph Simeon Assemani in his researches throughout Egypt and Syria... When the Jansenists provoked a new collision with the Church under the leadership of Quesnel, Pope Clement issued his two memorable Constitutions..Clement XI made the feast of the Conception of the B.V.M. a Holy Day of obligation, and canonized Pius V, Andrew of Avellino, Felix of Cantalice, and Catherine of Bologna.

This great and saintly pontiff died appropriately on the feast of St. Joseph, for whom he entertained a particular devotion, and in whose honour he composed the special Office found in the Breviary. His remains rest in St. Peter's.

"I must insist that we can only dare to undertake these things by grace, not by nature, nor even by effort. It is wisdom which overcomes malice, not effort or nature. There is no difficulty in finding grounds for hope: the soul must turn to the Word."

Ralph Martin writes, "Bernard also warns of the continual danger of turning the greatest good we have received -- the gratuitous grace of God -- into the greatest evil, the deluded pride that thinks God's gifts are our own doing or are deserved: 'do not treat his gifts as though they were ours by right, and thus not give glory to God...What is more wicked than for a servant to usurp the glory due his master?'"

Thought about the brother of the Prodigal son. If the story interested me originally in the prodigal, the wild more openly rebellious one being "more interesting" in the way evil is supposedly more interesting than good, now it interests me primarily in the elder brother. He had it all and didn't know it! How like us, who I think will look back in Heaven or Purgatory (hopefully) and see how much richness we had at our disposal. "All that is mine is yours," said the father to the brother. Oh if we believed that now.

Prayer line found: "God our father, glorious in giving life and even more glorious in restoring it." Amen!
Posted by TS at 2:38 PM

If you deposit with my link, Just Mail to:lemasterjamcdl@gmail.com with your deposit record.I will return 50% of your deposit. Never Missing payment.