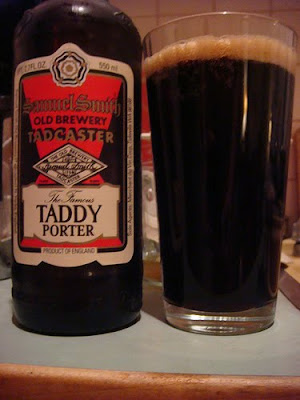 I have to say the difference between St. Pauli Girl's Dark and Lion Stout (or Tadcaster Porter) is the difference between coffee out of an '80s machine/dispenser and a gourmet Seattle blend. Indeedy, it seems I've upgraded my taste buds in both coffee and beer. For better or worse (the worse meaning financially) I've come a long way from the days of Busch Light and java swill. Now even what formerly was an upscale import, St. Pauli's, tastes watery compared to the stout-y goodness of Lion or a Sam Smith's. One thing that's deceptive about Lion is that it's 8% alcohol and tastes like 4%. The mark of a good beer, but at the same time every sip is a double-sip in normal beer terms. Makes for fewer trips to the 'fridge anyway. I've almost got it down to a (beer) science: how many drinks to ride the wave without making tomorrow a headache, literally.
Posted by TS at 9:15 AM

"One thing that's deceptive about Lion is that it's 8% alcohol and tastes like 4%. The mark of a good beer"

It's also evil. Hope I can find some locally.

You should try Sam Adams doublebock. Lights up the tastebuds like a pinball machine.

I'll be at the liquor store on Wednesday.