Interesting link about how police in New York City are asked to cover up crime statistics; reminds me vaguely of how in The Big Short Michael Lewis points to errant compensation models as incentivising stupid behavior on the part of Wall Street bank firms.

What's interesting to me is how this mania towards measurement has crossed into so many different areas. With major league baseball and the growth of sabermetrics there's this drive towards greater and greater efficiency while ignoring the human factors that go into it. You see it on Wall Street where these investment firms went from private companies to public and began courting the quarterly statement. And now we see a police department in NYC cooking the books.

_______
Ran into a co-worker as she was text-leaving the building, texting on her iPhone while stumbling slowly in the direction of the exit. "Never text and walk," I advised, and she said that she's worried about being addicted to this thing, how tough it will be if she has to go without it. I commiserated as a fellow "creature of the grid." It seems like a large step on the road of dependence to go from having a boom-box that uses six D-batteries (which can be stockpiled), to these Apple and Amazon e-readers and smart phones that not only require batteries that depend on electricity, but have batteries meant to be irreplaceable except through Apple, Amazon or hackerdom. The road to serfdom it is I tell you. But no one's holding a gun to my head either. 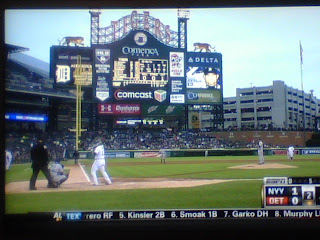 Enjoyed catching a bit of ESPN's coverage of the Tigers-Yanks game tonight. Nothing quite like an expansive view of a new ballpark, or at least one I've not seen before. I wonder if I'm the only one who watches baseball not for the game or players but for the scoreboard, surrounding buildings, agrarian field and basepaths.

Basketball I do follow, specifically the Cleveland Cavaliers in the playoffs where it's been a soap opera but with more ups and downs and far-fetched plot twists. Lebron James turns from Superman into Clark Kent before your very eyes, in successive games. His play is art, not life, it's a jazzy, improvisational foray up and down the court, and if the defense doesn't allow him some freedom of movement he simply passively passes the ball. He won't force notes, I mean shots. He manages to look above it all, above grubby panic, despite the circumstances. Down 2-3, they have to win two straight to advance.


_______
Took Tuesday off because I felt "in the groove" of yesteryear, those halycon daze of whine and poses. And for the sake of the cold. For it was only when sick that I seem to allow myself pure laziness, to watch fluff on tv, to cast out all thoughts of exercise, to eat indulgently of sweets, to maybe even sit quietly in the bookroom and absorb that most fleeting of all things: solitude. The fact it was rainy made it even better, for I had no shining hours to "live up to". There was no nagging you-should-be-outside-itis.

The last sick day I spent like this was likely just before Pope John Paul II's death. That Friday I'd called off due to flu and spent an a lot of time in bed watching the reporters watching for signs of the Pope's death. The next day I remember watching "Lawrence of Arabia", the sort of long-winded show that fares best when your attention span is longer than normal. I think I'll never forget where I was and what I was doing when I learned of JP II's death. Don't recall JP I's or Paul VI's deaths.


_______
A magical part of the day was reading a bit of the novel Prague, with its fish-out-of-water story that I so like. The typical American transplanted in Eastern Europe, with long David Foster Wallace-like asides which in this case included the protagonist's study of nostalgia.

Reading Rites of Spring: The Birth of the Modern Age by Modris Eksteins and feel the smarter for it. No twadling piffle, it's the vermouth of history books.


_______
I'm feeding a cold with beer right now, a gentle crest of Lion stout to be chased by a zephyr of Sierra Nevada. Perfectly civilized, if I do say. Moments of Lichtenstein...well I was taken aback again by Ps 42's "By day the Lord will send his loving kindness; by night I will sing to him, and praise the God of my life." And I took "day" as meaning when things are going well and by "night" when things are going not so well and I thought of how difficult it is to praise God during the nights of our life, but I can see how St. Paul did it so well, singing hymns in prison.


_______
I was always sympathetic to the view of a Protestant friend who said that Catholics use the Confessional as a revolving door and go out and sin immediately afterward. I was determined not to become one of "those Catholics," even though now I pretty much have. Now I wonder if that's a feature of Catholicism and not a bug, as they say in computer parlance. In short, I'm wondering whether we ought not be celebrating the forgiveness of sins rather than cursing our constant need for it?

I look back on my own past and see that the only unforgivable sin was sex, and so I was scandalized by the fraternity member with the cross on his chest and a girl in his bed. But didn't Christ hang with prostitutes? Was his sin so unforgivable or was it me that lacks "the long view". Sure he was greiviously sinning, but then so were the prostitutes and probably tax collecters Jesus associated with.

Jesus didn't seem to set up a litmus test and rank people but to win them - all of us - over. And he had the long view in mind; too often I look only at the short run and saw that guy as bad when he is probably holier than me at this moment.


_______
I was generally patient and cheerful with my boss this week. He attributed it, likely correctly, to the post-vacation bliss and he urged me to go on frequent vacations. Between him & the Darwins, I think I'll be ready every other week.
Posted by TS at 9:10 PM

So, do you think the Cavs will pull it out tonight? Maybe I'm cynical but I just don't think so - the NE Ohio curse!

I don't think I believed in the curse until last night! I have no idea who will show up tonight, the "good Cavs" or the "bad Cavs" but I'll sure be watching.

Love this quote, which seems to sum up a lot of my younger attitudes.

We used to own Rites of Spring, until the neighbor children took it into their heads to have a snowball fight in my living room and smacked the bookcase with slush. Rites of Spring was the only casualty.

We hang our heads in shame for the lack of vacation posts. Honestly, we did go!

I read a recommendation of Rites of Spring somewhere - maybe even on Darwin Catholic! - which prompted my acquiring it. Good to hear that was the only casualty.