Notes on a Day Off

Cellphone pictures from a trip to Schiller Park and St. Mary's Church: 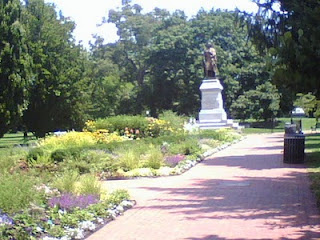 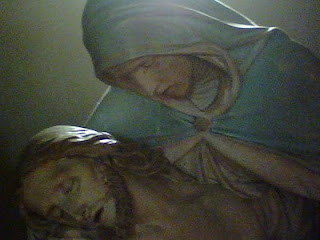 Later rode the bike around the mean and not so mean streets of German Village. Saw a few big 19th century schools, abandoned either due to summer vacation or declining populations. I thought of how, for all my appreciation for Victorian architecture, there is something cold about some of the schools and orphanages of that time. Austere.

Rode down Front Street and then east to Parsons. Rode by the famous Beck Tavern, made famous by a friend nicknamed Hank. Rode by Beck's School, Barrett School and St. Mary School. Dropped by the famous German Village bookstore and its 32 rooms of book (visited only three; looked for John Kasich's latest but instead found a book of pictures taken by a NYC cabbie of his customers. Lots of pictures of people, from fedora-hatted men to bashful teens.

Later, listened to an Albanian radio station because I can. Thanks to the power of the 'net you can surf to stations from just about any country, like a free ham radio. Supposedly even Afghanistan. This Albanian station is playing a dance song inflected with a Middle Eastern sound despite Albania's southern Europe geographic location. Actually not too bad, especially after surfing to Ireland (rap with a brogue, giving credence they are America 20 years ago), Cambodia (non-musical program in Cantonese), Belarus (I can't remember), Germany & Austria (forgettable US soft rock), Brazil more high-tempo than I was in the mood for. One Cuban radio station played elevator music the other Billy Joel. End up with a Haitian station playing "tropicale". Very island-y and perfect for the vacation mood. Appropriately, somehow, given we're dealing with Haiti, the record begins skipping ahead wildly until someone apparently intervened and put on a different song. Soon there appears what sounds like a drunken woman constantly breaking in and out of the record. Must be the local custom.


____
At a beautiful St. Mary's in German Village pondered a statue (pictured above) of the Pieta. Among the most wrenching of scenes in Christendom is the Mother of Jesus holding her dead Son. It seemed to reminded me of the Office of Readings that morning quoting The Imitation of Christ: "Let your thoughts be with the Most High and direct your prayers continually to Christ. If you do not know how to contemplate the glory of heaven, take comfort in the passion of Christ, and dwell willingly in his sacred wounds. Endure with Christ, suffer for him, if you wish to reign with him."

Think of Heaven or the Hell of His Wounds, but think of Him. The Blessed Mother, whose ability to love and thus to hurt is infinitely more than the typical human, is a fabulous example of how God cures mental pain too. A great fear of humans is that we'll experience a mental pain too great, but if we'll be 30 years old in our resurrected bodies, as is sometimes guessed, we'll be made similarly whole in our minds and hearts.

Finally I was struck dumb when I looked up far above me, in those heavenly arches above the altar, and saw in gothic script: "Ave Maria ... Gratia Plena." I was moved by the grandeur of it, how elevated Mary really is. (Above the angels! (But below God, for any Protestant readers how there. She's God's masterpiece, not her own.)) And second I was struck by the "Gratia Plena", plena in wholeness, in completeness, plena as in plenary indulgence, plena as in all things good. And I was consoled that I have such a mother, pray it be so, on my side.
Posted by TS at 11:26 AM

The phrase "books are so anal"--um- caught my eye; couldn't figure it out, until I went back and reread the "electronic" in front of it, and then it made perfect sense. Damn modernity.

I suppose I should've specified the Kindle as being that way - don't know about other e-readers!

Tour of Columbus! Awesome, and so timely. :)