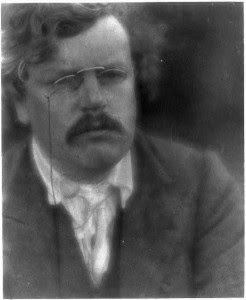 Reading in ye olde Chesterton book, with pages so brittle that to fold one is to mutilate it, I came across this passage about a subject near and dear to my heart: characteristics of Americans (or is that too self-conscious?).

"The Americans are a very self-conscious people. That is the nearest I have ever got to a generalization that really covers that great and mixed multitude. That is the thing that is really common to the optimism of Whitman and the pessimism of Poe; to the humour of Lincoln and the romanticism of Lee; to the Jingoism of President Roosevelt and the Pacifism of President Wilson; to the vulgarity of Billy Sunday and the virtuosity of Henry James. All the characteristics of all these characters had the slight extra touch of emphasis which belongs to a man who is conscious of his part or (in a more favourable phrase) who knows what he is doing...The English are a much more unconscious people; much more blind and automatic and absent-minded...

There is a great deal of this American psychology in the contradictions of the Prohibition controversy. Nobody can be expected to have any respect for Prohibition, but we ought all to have a respect for patriotism .And American patriotism, while very strong, is a curiously sensitive and self-conscious and sometimes almost morbid thing. The truth about the intelligent American is very simple, but it is not one that he can always be expected to admit. He is ashamed of Prohibition, but he is also ashamed of being ashamed of Prohibition. Even if he would have preferred the movement never to have come, he does not like the suggestion that it has come to nothing. He does not like the idea of so big a thing being a bathos and an anticlimax. It goes against all his national instincts for that queer process which he calls 'making good.' He would prefer that a thing should make good, even if it is obviously bad. There was something of the same sensibility in the old days about the Negro Slave Trade....

For good or evil, Old Glory has got another star, though all men say it is only a spot; it has got another stripe, though the whole world sees it is a stain. The American never imitates the Englishman in simply taking for granted both his own patriotism and his own superiority. The American is still very insistent in asserting that he has a country, les the world should still mistake it for a colony....Rather than that Prohibition should dishonour America, America must even honour Prohibition.

The easy habit of revolt really is an American quality; it is certainly not an especially English quality. It would be harder to establish so bad a law in England; but I think it would also be harder to disobey it.