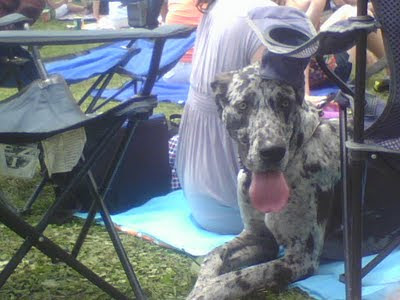 So it's Comfest weekend, better known to some as CommunistFest. They have a full slate of jazz artists, and jazz is a musical genre I can't seem to get enough of lately. Undaunted by the cool temps and a stiff wind, I was daunted by the pouring rain. It looks like I'll break my string of annual one-hour visits to the Goodale park festival that famously features the occasional bare-breasted gal and the smell of marijuana smoke, punctuated by the sight of booths affirming every liberal cause from amnesty to abortion. 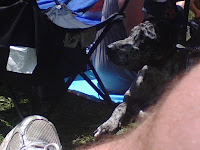 This year the organizers have turned their focus - naturally - away from war, because they are better Democrats than Communists. As long as Bush was in office, war was a terrible blight. Now it's something more easily overlooked, apparently. Oh, it's true the Comfest program took a swipe at our huge military budget, but the main thing they are rallying behind is a repeal of Ohio SB 5, a bill that would limit collective bargaining by public employees. Unions, God love 'em, seem to be going the way of the dinosaur, as are these old hippies who have added an "In Memoriam" section to the program. We'll miss both unions and the hippies; neither is completely bereft of truth.

Update: Went on Saturday while the sun was shining, as evidenced by picture at right.
Posted by TS at 10:38 AM