Riveting read is "Boomerang: Travels in the New Third World" by Michael Lewis on my Kindle. I doubt I'll ever look at Greece (or Germany) the same way after reading this. Some selections:

The [easy] credit wasn’t just money, it was temptation. It offered entire societies the chance to reveal aspects of their characters they could not normally afford to indulge. Entire countries were told, “The lights are out, you can do whatever you want to do and no one will ever know.” What they wanted to do with money in the dark varied. Americans wanted to own homes far larger than they could afford, and to allow the strong to exploit the weak. Icelanders wanted to stop fishing and become investment bankers, and to allow their alpha males to reveal a theretofore suppressed megalomania. The Germans wanted to be even more German; the Irish wanted to stop being Irish. 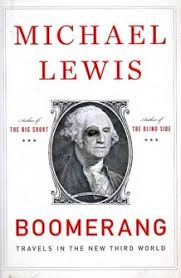 EVEN AT THE time, the decision seemed a bit odd. The Irish banks, like the big American banks, managed to persuade a lot of people that they were so intertwined with their economy that their failure would bring down a lot of other things, too. But they weren’t, at least not all of them. Anglo Irish Bank had only six branches, no ATMs, and no organic relationship with Irish business except the property developers. It lent money to people to buy land and build: that’s all it did. It did this with money it had borrowed from foreigners. It was not, by nature, systemic... if the Irish wanted to save their banks, why not guarantee just the deposits? There’s a big difference between depositors and bondholders: depositors can flee. The immediate danger to the banks was that savers who had put money into them would take their money out, and the banks would be without funds. The investors who owned the roughly 80 billion euros’ worth of Irish bank bonds, on the other hand, were stuck. They couldn’t take their money out of the bank. And their 80 billion euros very nearly exactly covered the eventual losses inside the Irish banks. These private bondholders didn’t have any right to be made whole by the Irish government. The bondholders didn’t even expect to be made whole by the Irish government... When a bank forces an Irish person into receivership, it follows up with a letter to his blood relations, informing them of his insolvency—and his shame. “It’s not like the United States, where being bankrupt is almost a badge of honor,”

A distinguished American anthropologist named Alan Dundes set out to describe the German character through the stories that ordinary Germans liked to tell one another. Dundes specialized in folklore, and in German folklore, as he put it, “one finds an inordinate number of texts concerning Scheisse (shit), Dreck (dirt), Mist (manure), Arsch (ass). . . . Folksongs, folktales, proverbs, riddles, folk speech—all attest to the Germans’ longstanding special interest in this area of human activity.” .... Perhaps Hitler was so persuasive to Germans, Dundes suggested, because he shared their quintessential trait, a public abhorrence of filth that masked a private obsession. “The combination of clean and dirty: clean exterior–dirty interior, or clean form and dirty content—is very much a part of the German national character,” he wrote.

it was hard to come away from his treatise without the strong sense that all Germans, high and low, were a bit different from you and me—a point he made in the introduction to the paperback version of his book. “The American wife of a German-born colleague confessed to me that she understood her husband much better after reading the book,” he wrote. “Prior to that time, she had wrongly assumed that he must have some kind of peculiar psychological hang-up inasmuch as he insisted upon discussing at great length the state of his latest bowel movement.” The Hamburg red-light district had caught Dundes’s eye because the locals made such a big deal of mud wrestling. Naked women fought in a ring of filth while the spectators wore plastic caps, a sort of head condom, to avoid being splattered. “Thus,” wrote Dundes, “the audience can remain clean while enjoying dirt!” Germans longed to be near the shit, but not in it. This, as it turns out, is an excellent description of their role in the current financial crisis.