National Review's Take on the Occupiers 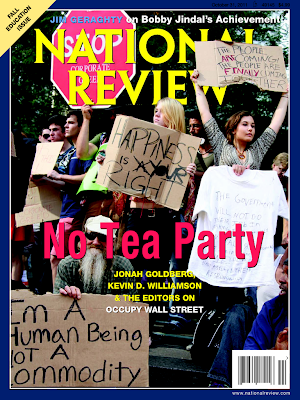 "It is true that many kids finish school with a heavy debt load they find it hard to pay. But that is an argument for rethinking the way we encourage young people to borrow to get overpriced degrees — not for funneling even more taxpayer resources to a relatively privileged group of Americans.

We trust that the liberals and Democrats who are attempting to ingratiate themselves with or burnish the reputations of the protesters — Washington Post columnist Eugene Robinson declared, “I love every little thing” about the protests, with no explicit exclusion of the defecation on a police car they have entailed — will at least blush the next time they denounce the alleged radicalism of the tea parties.

But mockery, and the use of the protests to discredit liberalism, should not be our only responses to this spectacle. We do not believe that the public burns with a desire to punish Wall Street (or to protect it from punishment); but it does have a justified concern that the Wall Street–Washington axis does not work to its advantage. And while many of the layabouts on the streets would have sub-Marxist thoughtlets in their heads under any circumstances, it is also true that hard times can radicalize young people — even people who are not directly affected by the hard times, and especially people who have been miseducated. There is reason for worry as well as scorn."

In the same issue of NR, James Lileks more pithily expresses something I wrote on Parody is Therapy a couple years ago. He says, "Last week's drum circle was intended to raise awareness about consciousness."
Posted by TS at 9:14 AM

come to think of it it is happening everywhere....we are told to borrow for overpriced degrees for sure but eventually we end up draining our pockets paying back this loans i have a friend whose wife was recently served with a letter from the tax man asking her to remit her loan and that is for the next three years man.....syclar