(Extra credit for those who recognize the song referred to in the title.)

A lightning round of posts sighted elsewhere in the wild. From Reading for Believers:

No, it wasn't a dream," said Edmund.
"Why not?"
"Well, there are the clothes, for one thing. And you have been - well, un-dragoned, for another."
The Voyage of the Dawn Treader, C.S. Lewis

"Crap," I thought, when Betty Duffy pointed out that I was not, as I thought, dashing off occasional notes to friends, but in some sense Blogging My Conversion, "now, since it's the next way-point, I'm going to have to write about First Confession, aka Reconciliation, aka (in these parts) Hohou Rongo, and I really don't want to do that."

People say they loved their first confession, and some practical people advise taking a large handkerchief, but my problem is with the examination of conscience. Fifty-mumble years old, committing mortal sins on a regular basis: it's Zeno's Paradox. However fast I tally the sins, I'll never catch up to the present. It's dreary work, too. It consists largely of discovering that I am far from being the person I think I am (mostly moral) or the person I pretend to be (mostly harmless).

I've also made the strange discovery that, however intimidated I have been all these years by my mother-in-law, she is more frightened of me. Poor woman. All these years when we could have been, if not besties, then at least comrades-in-arms.

But my worst problem has been a failure of memory altogether. This is partly because the Calvinist doctrine of Total Depravity combined with the doctrine of Imputed Righteousness adds up to excusing moral failure as unavoidable while passing the penalty Higher Up. Why register failure when the books are cooked? But some sin is so heinous that the Calvinist cop-out cannot cope, and then memory corruption kicks in for self-protection. "The heart is deceitful above all things, and desperately wicked: who can know it?"

So, I had such a sin straitjacketed away, and I'd half-forgotten it. It was pretty bad. It was bad, and not pretty. It was the work of a moment. I cried off and on for about a year after I committed it. If I'd managed to fornicate on the Sabbath while committing it, it would just about be a perfect strike against the decalogue. Somehow I had suppressed the memory till this very week, till this day, Sunday.

I had forgotten it; God had not: still merciful, and still with the sense of humour. "Father," I said to our priest after Exposition today, "since I'm coming into the Church on Saturday, when would it suit you to hear my confession?" "Monday, after Mass?" he said. "Yes," I said, thinking of my half-finished Examen and this unsavoury addition, "I think I can pull it together by tomorrow." "Oh, no, how about Thursday? I have a funeral on Wednesday," he said. "Yes," I said, eyes widening a bit, "fine."

Friends, if I read this elsewhere, I would suspect the writer had sugared it up to make a better story, but I assure you this is not the case. I will be confessing this awful sin, one which has roiled years on my soul, on the ten-year anniversary of my committing it - to the very day.

See you on the other side - after my un-dragoning.

I did a "general" confession about ten years ago, which is similar to what you're going through, I think. It looks back at one's entire life from the age of reason to current day. And I realized (I had forgotten, repeatedly) that a beastie has followed me my entire life. Once identified and acknowledged, I began to break free from it's various permutations. It is a grace to see your entire life in the light of Christ, to examine patterns of grace and sin, to know yourself--even when yucky things come to light.

I have wondered at times how anything good has managed to come out of my life--and doing this consecration to the Virgin thing I've been doing, it's become clear how God's mercy extends throughout space and time, sanctifying past, present and future, in spite of ourselves.

Marquette on the Shores of the Mississippi
By John Jerome Rooney

Here, in the midnight of the solemn wood,
He heard a roar as of a mighty wind,—
The onward rush of waters unconfined
Trampling in legions thro’ the solitude.

Then lo! Before him swept the conquering flood,
Free as the freedom of the truth-strong mind
Which hills of Doubt could neither hide nor bind,
Which, all in vain, the valley mounds withstood!

With glowing eye he saw the prancing tide
With yellow mane rush onward thro’ the night
Into the vastness he had never trod:
Nor dreamt of conquest of that kingdom wide
As down the flood the spirit took its flight
Seeking the long-lost children of his God!
NOTE
Father Jacques Marquette (1637-1675) was a French-born Jesuit priest who was one of the first Europeans to explore the Mississippi River. 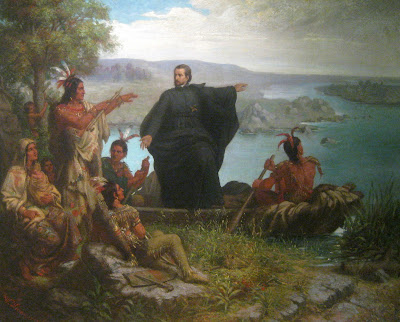 From Maureen at Aliens in this World:

Observe how frantically this particular ex-Catholic sf writer attempts to paddle away, when he hasn’t been Catholic for, like, a zillion years, and ostensibly no man pursueth. If you really don’t believe and don’t care, surely the whole argument would be a lot more distant. The only feeling you’d have would be a slight feeling of satisfaction as you roll over in bed on Sunday morning. And yet, all this effort and heat...Nobody goes around naming things for Marian stuff and giving Marian callouts unless you are looking for Mary to come help you out. It’s like saying you hate your mom and then naming your cat after her. And if you give Mary an inch, it’s not like she’s ever going to stop coming. She’s a Jewish mother, for goodness’ sake. If you never write and never call, it just encourages her. Insults? Oh, heck, that’s like a call for help.

...Why? Nobody knows. I have a hard enough time explaining humans without taking on the ineffabilities of God’s loving respect for free will. Faith, like wisdom and love, doesn’t seem to be a gift distributed in any way we can easily understand.

But the whole purpose of life is: to know, love, and serve God in this world; and to be happy with Him forever in the next. So somebody who’s an agnostic is missing out on a lot.

That one Italian cardinal said the other day, “If you’re lost in a crowd, take Mary’s hand and she’ll lead you to her Son.” This is the month of the Rosary, folks. Let’s pray for the lost, strayed, confused, and all those busy wrestling God.

From Bill at Summa Minutiae:

Here’s a recent interview with Esther de Waal, the author of Seeking God: The Way of St Benedict, one of my current books.

There are places for all the activities of the monastery, and at the heart of the great complex of buildings, in the very center—how audacious—they put empty space. The empty space is a garden, grass, flowers in very simple colors, white and blue, and at the very heart a fountain, a spring of living water. Compare that to a human being: We have all the demands and the various activities, earning your living, making decisions, hospitality, maintaining property, all the rest of it. And in the center, Christ is empty, uncluttered space. Around Christ is the busy walkway servicing the needs of daily life, but in the middle you can refresh yourself in the spring of living water.

The hard truth is that I don’t have to go to South America to be a saint. I can do that here, among the pots and pans and glowing rectangles of my life, by striving to remain fully awake, fully alive, living each moment in the presence of God. I can strive to love everyone I meet, not with my own love but the love of Christ — a love that isn’t always romantic or thrilling, that sometimes feels like drudgery, but only because its glory is hidden, like the glory of Christ was hidden on earth. Love in action means love where and when you are, not in the dream of some beautiful Elsewhere.

Lookit that! Thanks for the link. I'm hoping to turn around and go through the de Waal book a second time looking for quotables to blog & remember. It's that good.