The Humility of God 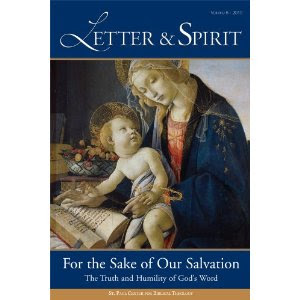 "Why lies he in such mean estate / where ox and ass are feeding?"

The above, sung at church Sunday, reminded me of Scott Hahn's offering in "The Letter and the Spirit" arguing that the humility of Scripture ought be recognized more, that just as Christ was rejected, looked down upon and a stumbling block, so too will Scripture, dressed as it is in humble language (the Greek often not up to par) and with difficulties abounding.

Here are excerpts from volume 6 of Scott Hahn's The Letter and the Spirit:

I should first summarize what constitutes “the humble style of biblical language.” By this I mean those less-than-appealing features of the Word that represent stumbling blocks to a belief in the Bible’s divine perfection. For instance, one thinks of Scripture’s frequent use of anthropomorphisms and anthropopathisms to speak of God, who is otherwise said to be “spirit.” Many have scorned these as the crude conceptions of an uncultivated people. One could also point to Scripture’s unpolished diction and grammatical solecisms, features that make the Word off-putting to educated minds with more refined literary tastes. So too, its penchant for hyperbole and poetic license and approximation fails to captivate those who think that the Bible should have nothing to do with colloquial parlance and speak only with scientific exactitude. Still more scandal is afforded by the numerous alleged discrepancies that make the Bible appear inconsistent with itself, with the documents of ancient history, and with the findings of modern archeology. The collective impression of these “blemishes” causes proud minds to recoil and refuse consent. It is a reminder that unbelief will always remain an option and even the default position of many who find no way to account for Scripture’s apparent lack of sophistication.

Recognition of Scripture’s humility invariably raises the question of its purpose. Why should God express himself and his will101 in the humble letter of the Bible? My own conviction is that it invites reason to embrace the knowledge of faith, and that it confronts pride with a summons to intellectual humility. The humility of the Word first of all represents a challenge to the supremacy of reason in the apprehension of reality. Reason, we are prone to forget, has inherent limitations with which one must come to terms. Not only is the intellectual faculty incapable of demonstrating the mysteries of faith disclosed through revelation, but it is also incapable of discovering the plans and purposes of God in history. This is a serious handicap when it comes to interpreting the Bible. It is not that we should retreat into fideism in our study of Scripture, but that we should avoid the irrationality of pure rationalism. One can say that reason functions properly when it accepts its limitations and acknowledges that there are questions it cannot answer.

I believe that the humble expression of the Word invites us to be healed of intellectual arrogance. This is obviously related to the foregoing comments about reason and its limits. But the fact is that even when faith and reason are working in tandem, the latter is tempted to impose unreasonable restrictions on the former. In the realm of biblical studies, this takes the form of methodological skepticism, otherwise known as “a hermeneutic of suspicion.” Not only does this approach mean that the Bible’s sincerity and truthfulness must be proven before it can be accepted, but that the interpreter stands in a position of judgment over the Word, measuring its claims according to his or her own standards. This is to turn things upside down. The folly of divine condescension urges that we lay aside our hypercriticism and our educated conceit in approaching the biblical Word.

I thought though that it's precisely this humility of "Christ incarnate and Christ inspired", that is of Word and word, that makes His indwelling in me possible, in "mean estate". So the next time I struggle with a seeming contradiction in the Bible I ought simply remember to approach it as indicative of my own hope in salvation.
Posted by TS at 9:01 AM