Found on Other Blogs 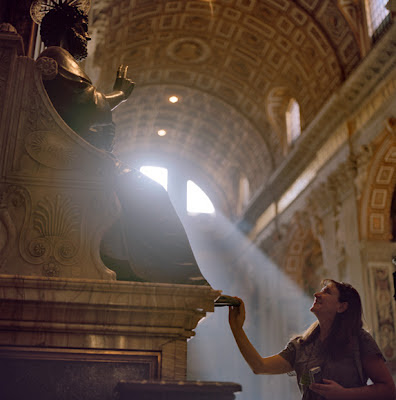 Sloth tends to dismiss the power of grace since it focuses on the “trouble” or effort attached to walking in the Christian way, rather than to understand it as a work of God...

On account of sloth, the idea of right living, and the gift of a transformed humanity inspires, not joy, but aversion or even disgust, because it is seen as laborious, or as involving the setting aside currently enjoyed or sinful pleasures.

In effect we are hyper-stimulated in the modern world. Our frantic pace, endless interruptions, and the rich abundance of entertainment, fast-paced movies, video games, all are a feast for the eyes but they hyper-stimulate...The “still, small voice of God,” the quiet of prayer, the simple reading of Scripture and pondering its message, the unfolding of spiritual meaning through reflection, the slower joys of normal human conversation in communal prayer and fellowship…none of this appeals to many who are hyper-stimulated, and used to a breakneck pace.

Many false expectations are centered in the exaltation of kindness over love. Generally this is manifest in the fact that suffering of any kind is seen as obnoxious, and even the cause for legal action. It has also led to our demands for comfort to become immoderate...A final and very terrible effect often flows from mistaking mere kindness for love is that it disposes many towards atheism. Here I simply want to quote Peter Kreeft because he says it so well:

It is painfully obvious that God is not mere kindness, for He does not remove all suffering, though He has the power to do so. Indeed, this very fact — that the God who is omnipotent and can, at any instant, miraculously erase all suffering from the world, deliberately chooses not to do so — is the commonest argument that unbelievers use against him. The number one argument for atheism stems from the confusion between love and kindness. [Peter Kreeft, Envoy Magazine, Vol 9.3, p. 20]

This being human is a guest house.
Every morning a new arrival.

A joy, a depression, a meanness,
some momentary awareness comes
as an unexpected visitor.

Welcome and entertain them all!
Even if they're a crowd of sorrows,
who violently sweep your house
empty of its furniture,
still, treat each guest honorably.
He may be clearing you out
for some new delight.

The dark thought, the shame, the malice,
meet them at the door laughing,
and invite them in.

Be grateful for whoever comes,
because each has been sent
as a guide from beyond.

Pretty interesting. Love the poem and and photos!