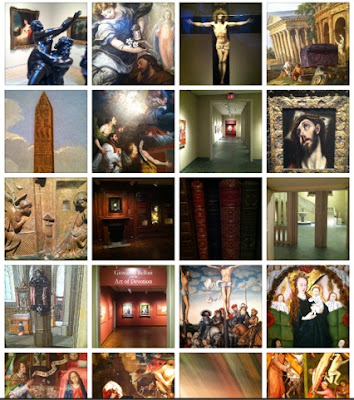 Delighted to be in the centre of it all, right outside the gaudy service men monument. I took a victory lap around the oval (where a large group of Middle Eastern folk were rallying to 'free Syria') and found, to my surprise, I was inches from the Indiana Symphony and tonight there's Grieg, so I impulsively bought a ticket. Grieg may be a buzz-kill - happy hour has just commenced an hour before the concert starts - but I'd rather error on the side of trying to do too much than too little. Am woefully underdressed but am in the nosebleeds so hope for inconspicuousity.

Was perennially behind time today given the voluptuous delights of the art museum and the grounds surrounding it. The sun shone strongly, which is ever helpful, and so I was loathe to enter the museum, preferring to dilly-dally around the outdoor statuary and hidden fountains. This was originally the summer home of ERF, "extremely rich folk", and their white mansion on the edge of the grounds was something to behold, like out of a fairytale. I momentarily forgot that with mansions and acreage that you eventually become accustomed to whatever initial shock of appreciation. Or so is my working theory, having never lived in a mansion or bought acreage. Still, I do know that despite having attained increasingly bigger back yards over the years they tend to shrink over time, psychically if not physically.

I wasn't sure if I was on museum land in the beginning, so there was the pleasant excitement of potentially trespassing. There's always a thrill in getting to see something "extra", something the natives don't, but I was hoping they didn't sic the dogs on me. The gardens were impossibly delightful, having that aspect of seek and find about them, of hidden vistas suddenly appearing. Fields within fields leading me, inexorably, to the formal gardens and majestic summer home.

Then onto the museum, which happened to be free. Even more shocking was that parking was free. Indiana, reputed to be a lower tax state, still manages to fully fund its museum of art. Kudos.

So I was there over three hours and never made it out of Europe. Beautiful, gorgeous art upon which I engorged myself. Unfortunately I found myself lapsing into the cursed collector/consumerist mindset by trying to snap every other artwork with my camera. Too often instead of enjoying the art in the now, I wanted to capture it in a picture for later.

I came to the museum for escape. I named my fears since that actuates a partial exorcism: that of being a more attentive husband and that of meeting increased challenges at work.

Going through the galleries, I came to one devoted to the sacred, and observed a disciple of Bosch who painted a scene of Christ entering Limbo (although truth be told it looked like Hell). All sorts of body parts were missing, limbs severed, etc. A menacing maw ate people as they entered. But there was Christ, powerful and heroic, beating down the enemies. A fine way to say, "Jesus I Trust in You".

Then there was the very simple painted crucifix of a Spanish king renowned for his personal austerity (hence the simple crucifix). Below the cross was a skull, a symbol of the defeat of Death, and again I'm taught of Christ's power, of how "by death he conquered death".

Later, at St. John the Evangelist, I found a pamphlet describing their sister church in Haiti and found this picture: 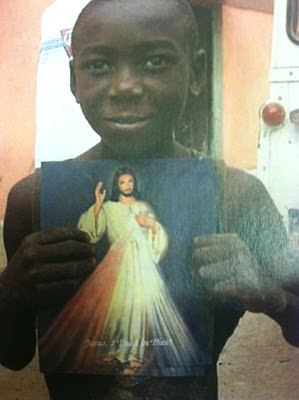 Another great: a 17th century panorama of the my favorite Marian apparition, that of Guadalupe. It was quite a stunner and I thought to myself that it was worthwhile to come here just to see this. I sat and drank it in for awhile.

Really there were so many mesmerizing works it was ridiculous. Sometimes a reader needs a solace beyond print. I'm not convinced a picture can say a thousand words, but it has persuasions all it's own.

It's hard to romanticize the view from the ho' (short for 'hotel') but I'm resolved to do so. 90% of it is parking garage, but I can see other things, like a Huntington sign and "SPIRITS" lit up like on the Vegas strip. Signs of life include cars going down Pennsylvania Avenue.

The biggest surprise here in Indianapolis is the love for Benjamin Harrison, x-teenth president of the United States. He must be the only Hoosier president else he'd not be such a big deal (unlike Ohio, which, I say proudly despite having nothing to do with it, has presidents out the wazoo.) There is a plaque and a room in the lobby of the hotel named for him, and there's a museum in or near town. He comes off as something of a cult hero in these parts (I base that on all of a four hour visit).

Went to the Symphony and it was a buzz-killer extraordinaire. Whatever desire for art I had it seemed to have got left in the Art Museum lobby because time till intermission was interminable. I bolt-actioned out right quick after two generous applauses for the guest pianist. He was good, I'm sure, but I guess I felt more like a good blues lick. Or something. All's I know is time moved preternaturally slow during the first movement where "movement" is a generous term. The only thing moving was my ass squirming in my chair.

I felt somewhat vindicated when I read in Saturday's Indianapolis Star that the beginning was indeed slow:

Klas began the program with one of several versions of fellow Estonian Arvo Part's "Fratres." Scored for string orchestra and percussion (which punctuates with taps the points of rest between iterations of the chantlike theme), "Fratres" hauntingly exhibits the spiritual side of minimalism. This performance adopted a slower than ideal tempo; as the strings gradually moved into their lower register and gathered heft, a more credible atmosphere of contemplation was established.

The pianist, Andre Watt, came on next and exhibited a sense of someone at the height of his powers: old enough to play with virtuoso aplomb, young enough to still have the fire.

Woke early, perhaps due to the unusual physical exertion yesterday or because of the exhilaration of being in a strange city.  Either way I slept in anyway, despite a ravenous hunger to read (because I hadn't read anything since Thursday), whereupon I rose and shortly thereafter descended into the bosom of Indianapolis's core. I found my legs a tad recalcitrant; I'm definitely not in good city vacation shape, defined by the desire and ability to walk 5-10 miles a day.  The sedentary lifestyle (except for brief 30 minute elliptical training periods) has a vacation price.

A friend once called Indianapolis "Columbus West", presumably because they're both state capitols randomly situated amid the cornfields. I did expect a greater density of churches but found only St. John the Evangelist of Catholic persuasion. No Mass till 12:10pm unfortunately. There was a Church of Christ church nearby, and that's the only other Christian church I sighted.  Of course my legs, feeling like lead weights, didn't cooperate beyond an hour stroll amid the concentric streets.  I did alight upon the converted Union Station (it's now a hotel that I'd considered booking).  The marvelous, massive interior space feels strange inasmuch as all this was done for trains?  It definitely gives off the air of a different era.  I tend to associate train travel with utilitarian beds carrying coal and other raw materials, but at one time union stations were the airports of their day.

Walking around on a cool, rainy morning, I didn't get the feel of the density of a NYC or even Chicago. It's okay but think I probably might've better spent the time walking the Canal Walk. Pictures on the 'net revealed it to be exactly that, a walk along a canal of water. Perhaps not Venice but you gotta dance with the one that brung ya.

There's something pleasing about just being in the hotel room itself. I open the windows to let in the light.  The sills are nice and deep - you can rest your elbows on them and look out over the scene.  I see an old-timey building with a pleasing stone edifice in near distance.  A faded "First Indiana Savings Bank" sign reminds me I'm not in Ohio anymore. (Which reminds me: yesterday three teenage girls were taking pictures of the War Memorial monument, saying that you "don't see that in Kansas.")

All-in-all a nice little trip.  The weather cooperated so splendidly - how tailor-made for the lovely garden stroll. I felt like an aristocrat, there walking amid "my" grounds, as if momentarily in a scene from Downtown Abbey. They were definitely difficult to leave, and I'd have liked to brought the Kindle and read there. (At the museum I saw a painting of a man reading in just such a park-like setting.)

The drive home proved to be painless. Nothing like excessive walking to make one receptive and grateful towards sitting for 2 1/2 hours. I listened to Dr. Barber's "Sacred Page" podcast followed by the inimitable Brian Lamb interviewing economist Walter E. Williams. Jolly good stuff.

I feel rejuvenated by the immersion in art. Another good thing about vacations: lots of exercise (walking) and better food. I tend to eat less cereal and junk food while, at the same time, exercising tirelessly. And I sleep on clean, allergenic-free, cat-dander-free sheets. 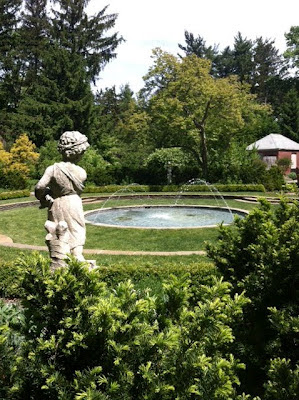 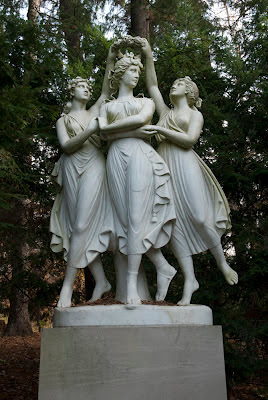 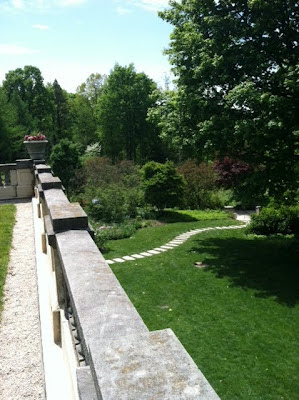 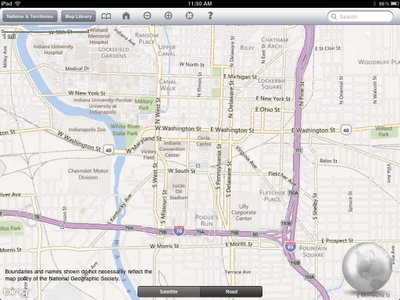 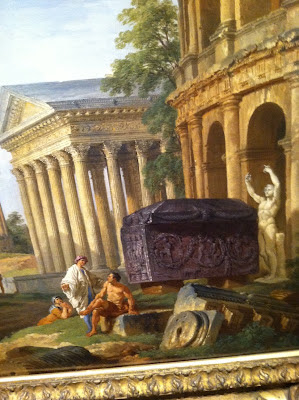 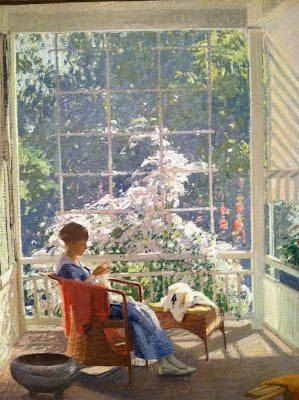 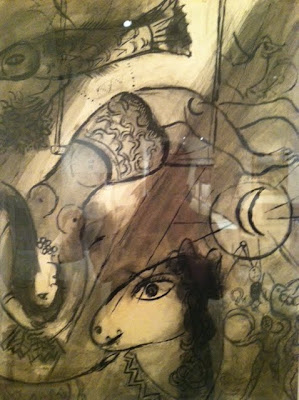 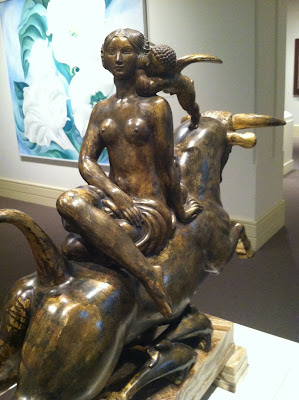 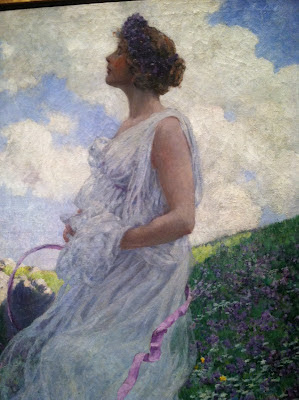 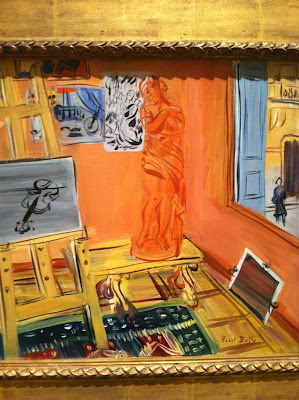 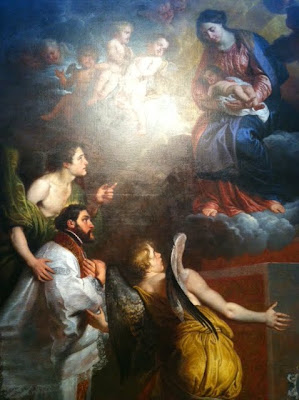 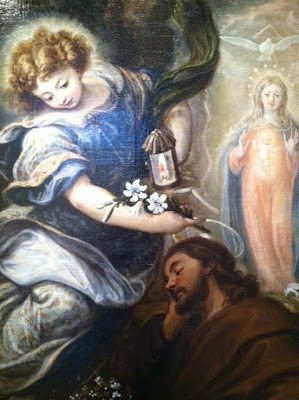 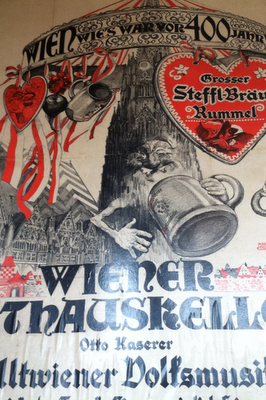 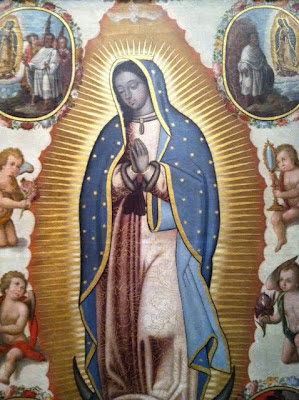 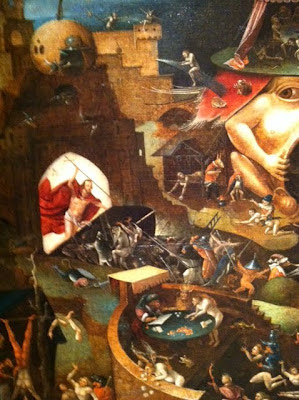 I took about 30.. All of which deserve to be posted!