Shades of Love in the Ruins...

Riveting read in the NYT about the junglelands of parts of post-Katrina New Orleans: 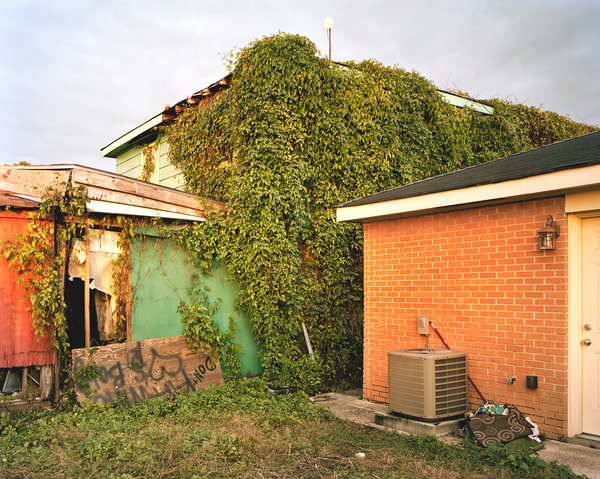 To visualize how the Lower Ninth looked in September — before the city’s most recent campaign to reclaim the neighborhood — you have to understand that it no longer resembled an urban, or even suburban environment. Where once there stood orderly rows of single-family homes with driveways and front yards, there was jungle. The vegetation had all sprouted since Katrina. Trees that did not exist before the storm are now 30 feet high.

In the race between nature and man, nature has jumped out to an early lead. But the pattern of growth has been bizarre. The Lower Ninth has been besieged by a flora feeding frenzy. A chaotic mix of plant species, many of which have never existed on that land, are battling for dominance. Before the area was cleared for plantations in the mid-1700s, the Lower Ninth was divided into three ecosystems, depending on elevation. The riverfront was lined with reeds and brambles; behind that was a dense hardwood forest; and farthest back, where Mary Brock and Pee Wee live, lay a cypress swamp populated by stands of palmettos. Today there are very few species native to the land, other than several kinds of sedge and aquatic grass. Only a handful of palm, live oak, pine and bald cypress trees survived the storm.

A variety of species, some exotic, have moved in, among them crepe myrtle, black willow and golden rain trees laced with vines. The undergrowth is a chaotic mix of weeds as high as basketball hoops and flowering shrubs like lantana, oleander and oxalis. Invasive species have infiltrated the neighborhood from the major avenues, the seeds transported by the flatbed trucks that drive to the city. The plant and animal life varies quixotically from plot to plot, as the new species entrench themselves, mustering strength, before fighting for additional territory.

The ecological composition of the neighborhood may be diverse, but it is also extremely unstable. “It’s a very odd mix, one that you wouldn’t other­wise see in nature,” Blum says. “It’s a Frankenstein community.” Ecologically speaking, Katrina has created a monster.

It's always interesting to me how quickly nature reclaims abandoned land. Thank you for this post. Very thought provoking.