I'm surprised that good St. Nick, so famous for easy-going largesse, once punched a heretic*.  If we tend to sometimes think of Jesus as mild-mannered and milquetoast, it seems we do it with other figures as well (St. Francis for another).   From Brandon Vogt's blog: 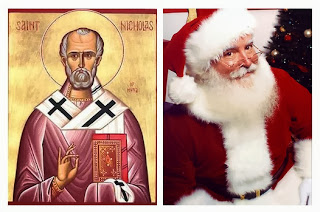 Today marks the feast of St. Nicholas, a saint remembered by most for his association with Santa Claus, some for his commendable charity, but a small number for his famous punch against a third-century heretic.

As the story goes, during the First Ecumenical Council of Nicea (AD 325) there was a big argument over the divinity of Christ. Arius, a heretical bishop, believed that Christ was not divine, but rather just a creature. The Council challenged him to defend his claims in front of his brother bishops, including jolly old St. Nicholas.

St. Nicholas tried to listen patiently but he considered Arius’ proposal so radical, so heretical, that he could no longer contain himself. In the middle of the speech, he rose with a scowl, charged toward Arius, and punched him right in the face...

Unfortunately, the Punch got St. Nichols into serious trouble. The Emperor Constantine was present at the Council, and he was so alarmed by St. Nicholas’ act of violence that he and the other bishops stripped Nicholas of his office and confiscated his two episcopal markers: his personal copy of the Gospels and his pallium, the vestment worn by all bishops in the East.

* - Speaking of heretic, I tease the pre-Vatican II church fans out there, but I think the Church's definition of being pastoral then was referring to a heretic with the softening modifier "material".  Now it's "separated brothers and sisters" ('sisters and brothers"?).

And from "Co-Workers of the Truth", we see that miracles were seen as ambiguous by the early church:


"Nicholas is one of the first of those venerated as saints without being martyrs. During the time when Christians were persecuted, those who resisted the powers of the pagan state and in defense of their faith pledged their very lives were spontaneously looked upon as the great guiding lights of the Faith. One of the sacred legends aptly states that all kinds of miracles could also be repeated by sorcerers and demons, and so they would remain ambiguous. One thing only would be totally unambiguous and not open to any deception: to practice goodness a whole life long; to live the Faith and hold fast to love in the common affairs of every day. The people of the fourth century experienced this miracle in Nicholas, and all the other miracle-stories, invented by later legends, are only variations of this one and fundamental miracle seen by the people, with admiration and gratitude, as the morning star that reflects the light of Christ. In this man they recognized what it means to believe in God made man; in him the dogma of Nicaea found its tangible interpretation for them." - Cardinal Ratzinger