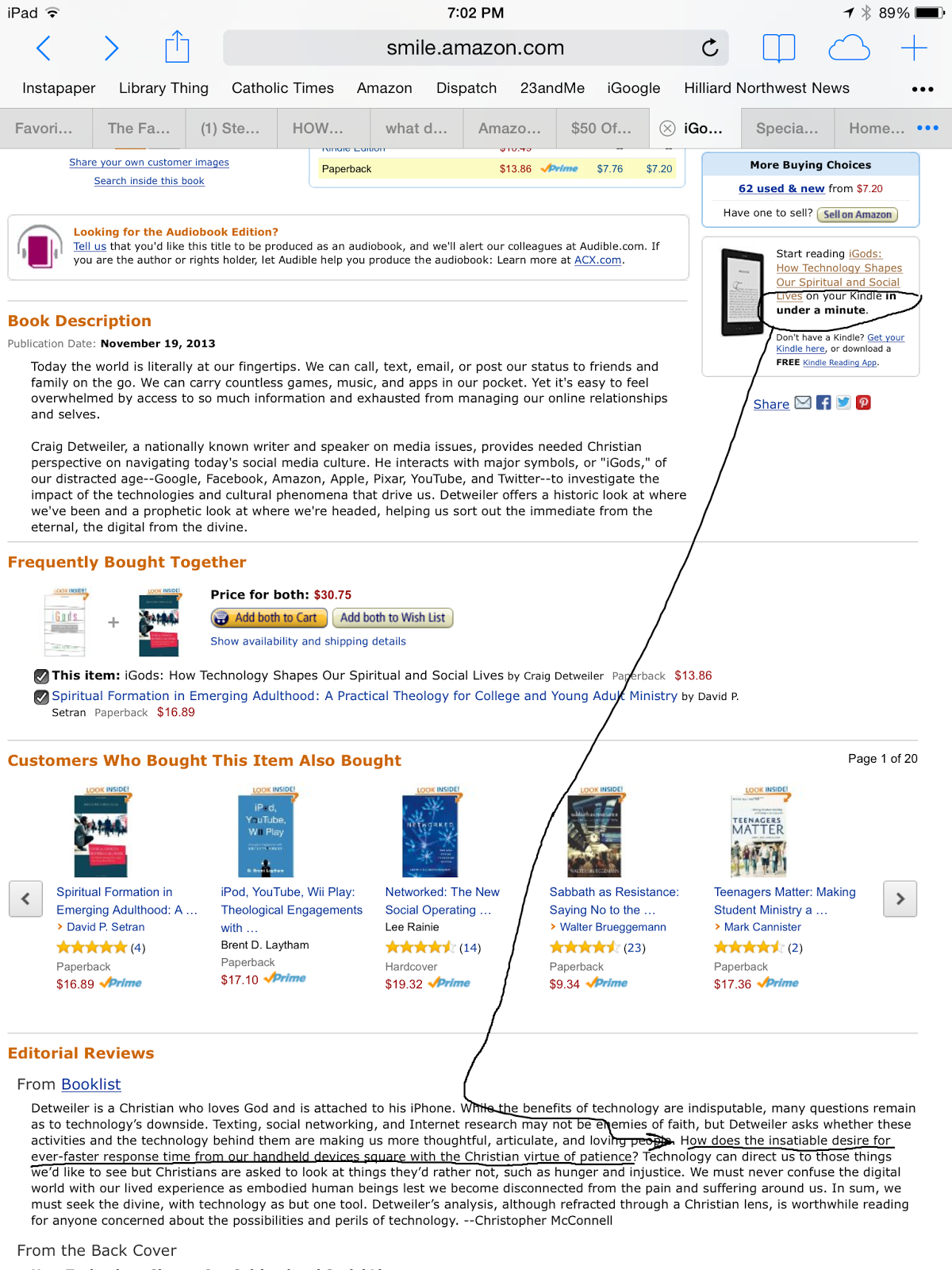 Came across a new book that would seem to cover the ground that Elizabeth Scalia already scoped out in her "Strange Gods".  This one, also written from a Christian perspective, is called (more felicitously I thought than Scalia's): "iGods".

The author said something I'd seen elsewhere, something perhaps a bit unsatisfying given the somewhat murky division between occasionally and more than occasionally:


Most idols begin as good things...When we shift from thinking about something occasionally (a romantic relationship, a promotion, a possession, our family) to obsessing over it constantly, we are turning an idea into an idol. It becomes the thing we cling to, that gives our life purpose and meaning. Idols are anything we're so attached to that we can't imaging living without... What would we hate to lose and feel lost without?  Where do our thoughts wander in our free time?

Read more of Jack Gilbert's poetry. Oh but I'm going to be powerful sad when the book is done, as it shortly will be. For whatever reason I seem to have lost the Cummings bug, at least momentarily. Just a bit too cryptic and “cute” for me, the punctuation feels a bit gimmicky over time and it just makes me appreciate Gilbert's no nonsense, more prose-y approach more. I like that Gilbert brings up religious subjects.

Some excerpts from this a.m:


There is a film on water which permits a glass to hold more than it can hold. If probed, the water breaks. Before and after, both are truly water. But only one will support swans.

And in its entirety (without line breaks unfortunately since this is a cut & paste from Kindle):


They have Mary’s wedding ring in the Cathedral. I was eager to see it, but learned it is kept fastened in a box which requires keys carried by the district’s three main officials. The box is locked seven times in a chest and the keys held by their chief guilds. The chest is sealed in the wall of the nave, thirty feet in the air. Stairs are built to it just once a year. It is a very holy relic, and I assumed they feared thieves. Today, when I asked of it, I learned it is magic. The color changes according to the soul before it. Then I understood about the locks. The ring is not being protected. It is locked in.

So we're right in the sweet ache of summer, smack dab. It's still early July or at least mid-July, and I take comfort in that even though in the back of my mind I think it's never quite the same after the Fourth of July. It's that tissue thin difference between a woman of, say, 24 and one of 30. There's never enough summer (or youth) unless you live in L.A., and even some of those folks think they have seasons.

Jogged the Goodale route this time, around the park and the large pond with the spouting elephants. The beauty of the fountain in the sun, the statuary of the elephants, their trunks jaunty in the air, made for a breathtaking scene. Reminds me of some of the great shots of Fountain Square in Cincy as shown before some Reds games. Who does not love a fountain in summer? Certainly everyone in Rome…

Later I headed out to the local bike path where I had one of those old-fashioned long (for me) bike rides. Took the trail to the beautiful white farm house, turned right and took the next left, onto the quintessential rural road. Squint your eyes and you'd swear you were in Glynnwood, Ohio, aka God's country. I rolled down the road listening to music on the headphones, including a satisfyingly country/drinking (redundant?) song.

Then took our dog Buddy on a quick ten-minute walk at the park after confronting an orange traffic barrier with a sign saying Beware Aggressive Bird. Wow, that's something I've never seen before in my whole life. I guess if you live long enough you'll see everything. The bird ended up being less aggressive than advertised; with that announcement I was expecting, and half-hoping, to get dive-bombed. I was ready for battle; I would take on any bird using my comparatively large size to my advantage. 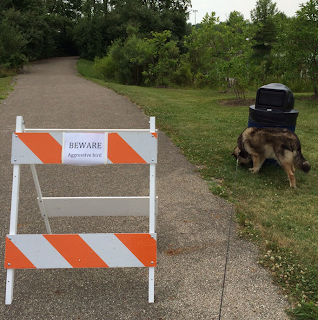 The red-winged blackbird was certainly loud and obnoxious, cackling overhead loudly and “escorting” me along the bridge but it wasn't exactly out of Hitchcock's The Birds and no humans (or dogs) were harmed during the walk.

It's funny to see how presumably a fear of lawsuits or safety-mania now involves putting up a sign to warn of a bird (maybe it's a terrorist bird?). I think with safety, as with wealth, (or the welfare state) there seems no natural stopping point: you're never rich or safe enough. It's also partly generational since each generation has an expectation of greater safety and wealth. Certainly I expect safer working conditions than were prevalent in the early 1900s, and no doubt my grandchildren will expect their children to wear not just helmets but full football-gear/pads for a bike or car ride. And no doubt their houses will likely be a lot bigger than mine.

Arguably these are the stages of enlightenment -- in order of increasing difficulty for people to believe --:  a) there is a God, b) He loves us c) He's still with us in Communion, really present and d) his Spirit is within us and our neighbor.

Watched the action-packed finale of 24. Tight season with a sad, heart-rending ending: President Heller, diagnosed with Alzheimer's, comes to terms with the tragic death of his daughter by realizing pretty soon he would forget her death or that he even had a daughter. Alzheimer's has about it a special cruelty of loss, though in one sense it just makes God that much more amazing given that He's going to make it right, and not just make it right but bring some spectacular good out of it. I suppose if we didn't see the depths of earth how would we know the heights of God?  A rescue is no rescue if it's not from danger.

Enraptured by a picture taken of our glorious backyard during the sun-zenith, and realized just how rare a feeling it is, to be out in the yard under those circumstances. Definitionally it can only happen on weekends and holidays, and most holidays seem to be occluded with social or other obligations. So that leaves just Saturdays in June, July and August and naturally it'll be cloudy or rainy for some of them (at least in "Cloudumbus"). So out of 365 days there are maybe twelve max non-vacation days I'm appreciating full sun at some point between 10am and 2pm in our backyard.

Ha, from Life of Johnson (I beg to differ!):


[Johnson] again advised me to keep a journal fully and minutely, but not to mention such trifles as, the meat was too much or too little done, or that the weather was fair or rainy. He had, till very near his death, a contempt for the notion that the weather affects the human frame.

Posted by TS at 10:27 AM No comments:
Labels: a diary by any other name, State of the Weather address

Let Us Arise and Go to... Cleveland? 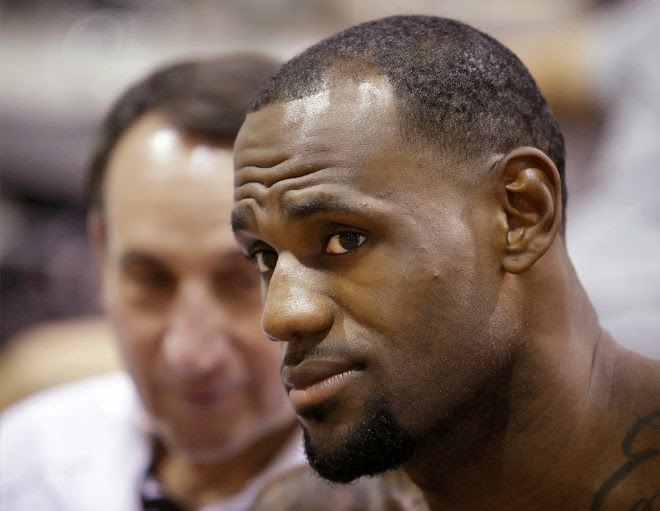 Well, this is good and surprising news.  I'll love being able to watch arguably the greatest athlete on the planet any time he plays (since Columbus cable package includes Cleveland pro sports).  Bank error in my favor.

Reading that story, it's kind of surreal that Lebron James could put aside the seeming bridge-burning of the Cleveland owner four years ago.  I may be a sap but I found that SI Lebron essay linked above downright inspiring.
Posted by TS at 1:03 PM No comments:

The Insouciance of Summer


"If sensuous beauty delights you, praise God for the beauty of corporeal things, and channel the love you feel for them onto their Maker, lest the things that please you lead you to displease him." - St. Augustine

"This woman….often reminded me of something Samuel Johnson said of pretty ladies: they might be foolish, they might be wicked, but beauty was of itself very estimable." - Saul Bellow, "Humboldt's Gift"
Posted by TS at 9:09 AM No comments:
Labels: cell phone pics
Newer Posts Older Posts Home
Subscribe to: Posts (Atom)