Well I had the pleasure of meeting one Bernadette Luse today, daughter of the Professor, in somewhat less than ideal circumstances: She had a difficult round of golf, ending five over. But she was a professional and cordial despite it. We both agreed we'd wished Bill was here.

The day started with an unusual celestial event - the sun was in the eastern part of the sky. And instead of moving downward into the horizon, it slowly went up! Amazing. Can you tell I'm not a morning person?

After a long walk from the parking lot I saw a sign saying that cellphones and cameras are strictly verboten during the tournament days, e.g. Thurs-Sat. (This was a twofer as I was double-barrelled.) I turned off the cell phone and only got the camera out for very long shots, which is why the photo below looks like it was taken from the Goodyear blimp: 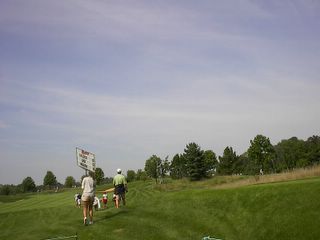 Bern's in a red skirt, to the right of a sign indicating their score

It all started where golf rounds usually do - hole numero uno. I found myself in a gallery of one, so when Bern whispered something to her caddy causing him to quickly looked over his shoulder at me, I figured it was something like "there's that blogger my dad told me to watch out for." My goal was to keep a low profile and not be a distraction to her until after 18 holes.

I was amazed to find that their drives on number 1 were all within a few feet of each other. Never happens when I play, where after teeing off our group scatters to the four winds of the fairway (and surrounding highway).

I made eye contact with Bern after hole 3 and she gave me the sweetest smile. I looked away, guilty that I'd caused a distraction. The difference between her game face and when she smiles demonstrates an impressive mobility of expression. 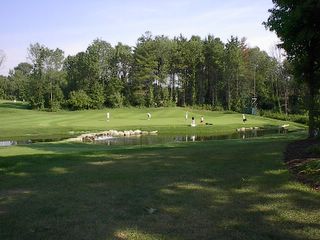