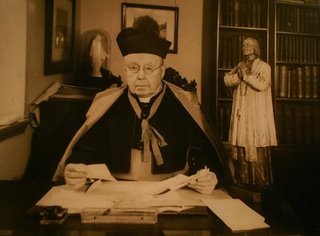 (Image at left from Irish Elk.)

Well tis another Ash Wednesday, the day we are reminded of something even the pagans will admit: that to dust we shall return. And I got to Mass late, which irritated me because the parish downtown plays a sort of Three Card Monty game with the masses. Most weekdays it's 11:45am mass. Holy days of obligation it gets moved to noon. Apparently today isn't a HDOO even though it was jam-packed. I'm pretty sure I arrived late last year for the exactly same reason. I wasn't irritated then because I'm a disciple of the "fool me once, shame on you, fool me twice, shame on me" school. But I recalled St. Therese's words: "If you are willing to bear serenely the trial of being displeasing to yourself, you will be to Jesus a pleasant place of shelter". Too oft I double-bogey it by being displeasing to God & then being unduly displeased by my act of displeasing. Alack and alas! But Lent is a time for the triumph of hope over experience and at the end you can wear one of these.

The trick for any preacher when treating of sin, not least because he is a sinner himself, is to steer between this dilemma: First, he must not do anything to mitigate the Bible’s uncompromising demand for Christian holiness; but second, he must avoid the tub-thumping rhetoric of those preachers who think that mere denunciation will motivate their flocks to the abjuration of sin and the pursuit of holiness. In other words, the preacher must fuse together a high demand for a consistently pursued holiness with a shrewd—and compassionate—sense of human psychology, with its attendant weaknesses.