Lecture titled "Up to Jersualem...The Journey with Jesus": 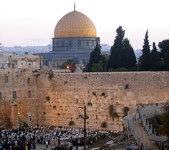 What made biblical cities, like other ancient cities, a city? Walls. You couldn’t have a town without them. Walls not only defined the city limits but protected the inhabitants from mauraders and invaders. Walls also made punishment of transgressors within possible, since if the watchers in the towers noted a crime they could command "close the gates!" and stop the person from fleeing, and therefore be able to find him within the city confines.

Joshua (in Greek 'Yeshua' meaning “Jesus”) was the first to cross into the land promised to Abraham’s descendents. He crossed the Jordan river and the first city he took was Jericho, the ten-thousand year old town that was often represented with Rome and Babylon and others as ‘the devil’s city’. Jericho is the city situated at the lowest point on earth, a way of saying something spiritually through topography.

Joshua didn’t conquer all the Holy Land at once, though he did take many cities. It was left to his descendents to continue to gain the Promised Land. And which was the last city to fall? Jerusalem, by King David. But when David wanted to build the first Temple in Jerusalem, God said no. It was God's plan that a man of peace would build the temple at the "City of Peace", not a man with blood on his hands. David’s son Solomon (name “Shalomo” or ‘peaceful man’) built the Temple, just as another man of peace, Jesus, would build the new Temple.

When Jesus entered Jerusalem the final time why did he go out of his way, choosing an inconvenient route by crossing the Jordan river and going into Jerusalem via the uphill, desert road of Jericho? Because it was the route Joshua took. Jesus was intentional in this in order to show himself as the new Joshua. Why did he cleanse the Temple at Jerusalem when he'd been there before and likely saw the same things (moneychangers) going on? To fulfill the prophecy that zeal for his Father’s house would consume the messiah. The road Jesus took into Jerusalem was straight uphill - a symbol of the spiritual life being compared to climbing a mountain. Jericho is 853 feet below sea level while Jerusalem stands on the crest of a chain of mountains that cross Palestine from north to south, and which is its highest point 2558 feet above sea level. But Jerusalem doesn't lie on any important trade routes, nor is it the highest point, nor is there any natural reason why this city should be one of the most important places in the world for over four thousand years. Why Jerusalem? Because it was God-chosen, not man-chosen.

Bible history begins with Abraham; the first eleven chapters of Genesis are like "algebra" rather than a straight history. The only place in the bible where God asked for an animal sacrifice was when Abraham was told in Genesis 22 to sacrifice a ram caught in the thicket in lieu of his son Isaac on Mount Moria, the future site of the Temple of Jersualem. Abraham never owned any land in the Holy Land other than his grave plot in Hebron, south of Jerusalem. Abraham was basically nomadic. Shem, one of Noah's sons, might have been the mysterious Melchizedek, the "King of Salem" (Jerusalem) who offered Abraham bread and wine. (The word Semite comes from the name 'Shem'.)

The Mount of Olives, just east of the Temple, is where prophecy said the messiah was to arrive (and the sight of the Second Coming) and so the Jews' graves just outside the city all faced that mountain. Christ rode into Jerusalem on a donkey to great praise and fanfair from that mountain only to be killed soon after. The Garden of Gethsemani is also there.

Another example of God using geology as a prop was when Jesus took Peter up to Ceasari-Phillipi. The most prominent rock in the Holy Land is the one around which the Temple in Jerusalem was built. The second is the massive wall of rock at Caesarea Philippi, where there were pagan altars above and below it. That was the rock upon which Jesus would build his church against which the gates of hell would not prevail.

The Holy of Holies contained the Ark of the Covenant, which contained the commandments given to Moses and some of the manna given by God in the desert. The new Ark of the Covenant became the Blessed Mother, with Jesus's new Law of love and himself as manna in the Eucharist. Faced with the ark, David said, "Who am I that the ark of the Lord should come to me?" (2 Sam 6:9) Elizabeth tells Mary in almost the same words, "Who am I that the mother of my Lord should come to me?" (Lk 1:43) Why is Mary referred to as a "Queen"? Psalm 45 depicts a royal wedding with the line "The queen stands at your right hand, at your right hand arrayed in gold". And yet the queen isn't the person the king is marrying! Polygamy is and was a rich man’s game since the one ironclad rule that makes it work is that every wife gets her own house. So it is the Queen mother who lives with the King, who "stands at his right hand".