The Catechisms and Marriage 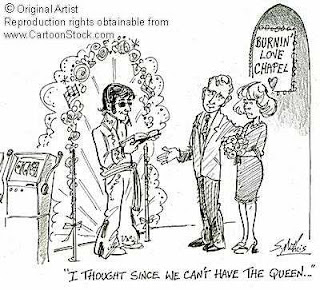 A Catholic acquaintance is getting married in Las Vegas without benefit of clergy. (We're all invited though, making this a sort of non-elopement elopement.) I can't say I'm surprised - the fact the tremendous gift of the Eucharist has been de-emphasized over the past thirty years certainly means people will devalue the sacrament of matrimony all the more.

For the modern world, it seems superstitious that God gives graces through the sacrament that he wouldn't without the sacrament. It seems unfair to non-Christians at least. In a democracy, the equality principle is in our blood figuratively-speaking even though we are made unequal by virtue of our blood (i.e. physically more or less attractive, intellectually more or less talented, etc...).

Of course the way you equal the playing field is the way Jesus equalled it: to those who have been given more, more is expected. See CCC 1615:

This unequivocal insistence on the indissolubility of the marriage bond may have left some perplexed and could seem to be a demand impossible to realize. However, Jesus has not placed on spouses a burden impossible to bear, or too heavy - heavier than the Law of Moses. By coming to restore the original order of creation disturbed by sin, he himself gives the strength and grace to live marriage in the new dimension of the Reign of God.

So it might seem unfair that merely by living in chronologically favorable times, i.e. after the Incarnation, when actually more is required of us than was required of the Jews at the time before Jesus.

I then began reading the Council of Trent catechism and was struck by how practical in some senses it was, and how frank:

We have now to explain why man and woman should be joined in marriage. First of all, nature itself by an instinct implanted in both sexes impels them to such companionship, and this is further encouraged by the hope of mutual assistance in bearing more easily the discomforts of life and the infirmities of old age.

A second reason for marriage is the desire of family, not so much, however, with a view to leave after us heirs to inherit our property and fortune, as to bring up children in the true faith and in the service of God. That such was the principal object of the holy Patriarchs when they married is clear from Scripture. Hence the Angel, when informing Tobias of the means of repelling the violent assaults of the evil demon, says: I will show thee who they are over whom the devil can prevail; for they who in such manner receive matrimony as to shut out God from themselves and from their mind, and to give themselves to their lust, as the horse and mule which have not understanding, over them the devil hath power. He then adds: Thou shalt take the virgin with the fear of the Lord, moved rather for love of children than for lust, that in the seed of Abraham thou mayest obtain a blessing in children. It was also for this reason that God instituted marriage from the beginning; and therefore married persons who, to prevent conception or procure abortion, have recourse to medicine, are guilty of a most heinous crime -- nothing less than wicked conspiracy to commit murder.

A third reason has been added, as a consequence of the fall of our first parents. On account of the loss of original innocence the passions began to rise in rebellion against right reason; and man, conscious of his own frailty and unwilling to fight the battles of the flesh, is supplied by marriage with an antidote by which to avoid sins of lust. For fear of fornication, says the Apostle, let every man have his own wife, and let every woman have her own husband; and a little after, having recommended to married persons a temporary abstinence from the marriage debt, to give themselves to prayer, he adds: Return together again, lest Satan tempt you for your incontinency.

These are ends, some one of which, those who desire to contract marriage piously and religiously, as becomes the children of the Saints, should propose to themselves. If to these we add other causes which induce to contract marriage, and, in choosing a wife, to prefer one person to another, such as the desire of leaving an heir, wealth, beauty, illustrious descent, congeniality of disposition -- such motives, because not inconsistent with the holiness of marriage, are not to be condemned. We do not find that the Sacred Scriptures condemn the Patriarch Jacob for having chosen Rachel for her beauty, in preference to Lia.

The first (beneficial consequence) is that men are given to understand that in entering Matrimony virtue and congeniality of disposition are to be preferred to wealth or beauty -- a circumstance that cannot but prove of the very highest advantage to the interests of society at large.