Article 1. Whether the Anglican Chasuble is Uglier than the Catholic clergyman's? 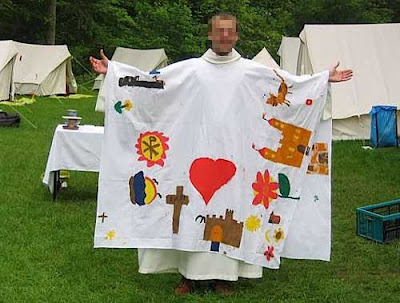 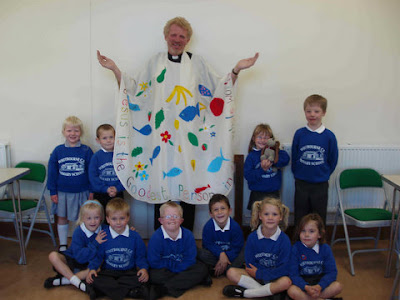 Objection 1. It seems that the Catholic's chasuble is uglier. The objects manifested are large and assault the eyes, seeming to be much more "in our face", as the kids say, than the Anglican's.

Objection 3. Further, the body language of the Anglican prelate suggests the correct emotion of sheepishness, while that of the Catholic is of inexplicable triumphalism.

On the contrary, Dionysius says (Div. Nom. vi, 2) that "Ugly things appear uglier upon close inspection, unless viewed through the lens of beer goggles."

I answer that, men are governed by image and sentiment such that they will rarely consider how an image was made in determining the relative ugly-quotientness of chasubles. The visceral reaction to the image is considered, rather than taking into account the lighting on the respective chasubles, the impact of the model of the chasuble, and the camera's closeness to the respective chasuble.

Furthermore, everything in the Anglican's chasuble is ugly while there is this cool little castle in the Catholic's chasuble:

Further, the Anglican chasuble includes incorrect grammar: "Jesus is the goodest person...". Now the end is good, the message of Christ's goodness, but, as Zippy might say, you can't employ a bad means to a good end.

Finally, the Anglican's chasuble is a perfect rendering of an aquarium and as such is unrecognizable as something intended to be of a sacred nature. The Catholic's still has recognizable iconic images on it, such as the cross and symbol of Jesus.

Reply to Objection 1. The Catholic priest's chasuble is more "in our face" by virtue of the camera being closer to the offending object. The colors appear bolder and more tacky due to the greater light shed on the subject.

Reply to Objection 2. The lack of symmetry is offset by the fact that there is more white space in the Catholic chasuble, which can only be a good thing in an ugly chasuble.

Reply to Objection 3. One must scrupulously avoid taking the body language of the participants into consideration. It's true that the Catholic looks like he is saying, "PickmePickmePickme!" with his absolute lack of embarrassment. It's true the Anglican looks like he's saying, "Oh gosh, the things I wear for the children! I'll have a shorter Purgatory for this!" (if Anglicans believed in Purgatory that is). However, this is not an acceptable argument for choosing the Catholic's chasuble as uglier.
Posted by TS at 2:46 PM 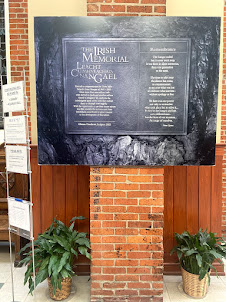