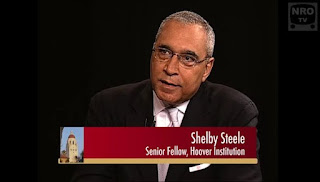 Interesting video interview of Shelby Steele on Obama and race in this country. In it he suggests Obama constantly betrays himself, who he really is, by doing such things as going to an Afrocentric church where his white mother wouldn't feel welcome and which is "beneath him intellectually". I'm skeptical about some of Steele's statements but I ought read his book. Part of it is that Steele thinks it's a betrayal that although Obama was formed by his mother and her middle-class values (his father left home when Obama was two) he appears to identify with and/or seek out his father's race and culture. But that would seem a natural reaction in someone who never knew his father's culture. Viva le difference?
Posted by TS at 3:52 PM