From Fr. Corbett O.P. concerning the the Commandments and the Beatitudes at a retreat:

Commandments are firewalls that attempt to prevent destroying God's portrait of Himself in us. It's a defense of the human. Murder, adultery, etc.. destroy the image of the human, for man is made in the image of God. Commandment describes what keeps us alive. Lies unmake creation.

The Beatitudes are about Christ. They are a portrait of Him and who we can become. They are the destiny to what we are called to, end points, not entry requirements to Heaven. Commandments are the entry points, not the Beatitudes.

In the gospel today [Matt 5:20-26] Jesus doesn't mean that if we call someone fool we are going to go to Hell. It's the end point, not an entrance requirement. Because God lacks nothing, he only acts in order to give. We act to get because we are needy. If we hunger, we act in our eating. God has no need to act at all. No need to create. We need to remember that when we come across a difficult command of Christ. It's not as if he's on a power trip or that we are slaves. God acts only in order to give us something. 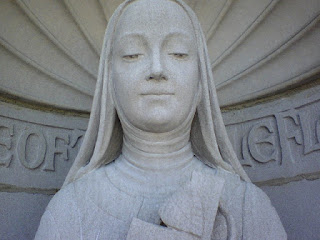 The ability to know and love is what makes us like God. Knowledge and love. Mind and will. Nothing else on earth is made in that image of God. We resemble Him. The Holy Spirit completes the act of creation. Our only purpose is to look like Him, to give glory to Him by looking like him.

After Moses came down from the mountain he was glowing. And rabbis have said he was glowing with the light that God had created on the second day of creation. In other words, moral truth - the Law - is in our DNA and wasn't meant to be something to be added to us later: "in the beginning, there was the Word."

Reason is universal - why not revelation? I don't know. This is called the "scandal of particularity". 2+3=5 is accessible to anyone anywhere in the world. We have real problems with God choosing people, in Him being especially active two-thousand years ago in the Middle East than in 21st century Manhattan. There is election, God's elect, but he always does that for the save of others. It's for others, through you. Both/and, special & universal.

The first commandment reads: "I am the Lord your God who brought you ought of the land of Egypt". Why? Did God need an introduction as if at a cocktail party? Blessing always precedes commandment. It is His signature. For the Hebrews, a name was what it signified. His name is that he makes slaves free. "Blessed is he who comes in the name of the Lord" is the same as saying, "blessed is the Lord".

In the Genesis account of the Fall, the desire for knowledge of good and evil meant the desire for control over good and evil. To determine what was good and what evil. Eve already exaggerates morality by telling the serpent, "we can't even touch the tree," which was false. Isn't that exactly what we do today? We make God stricter, less reasonable than He really is? Eve begins to think God has an agenda, that He's keeping something from her and Adam.

The creation account was written during the Babylonian exile and is a refutation of the Babylonian creation myth. The latter sees the world has having been created out of an act of violence and that humans are intended to be slaves of the gods.

Genesis says that the world was created in bliss and peace - that is that reality is, at root, not conflictual - and that humans are to be friends of God.

Friends of God or slaves of God? Eve was asked to choose. At the moment of the Fall the human mind "froze" like a computer screen. Original sin gave us a fun-house mirror view of God, a great distorted view of God. It froze our minds into a hermeneutic of suspicion concerning Him. Jesus undoes that Original Sin by becoming a pure window of God. And if we don't know God we can't know ourselves because we are made in the Divine image.

Idolatry was the great sin of the OT. God allowed no to images of Himself because he knew they would be horrible caricatures. A sick person can't discern good food. A hater of opera can't discern good opera. "Walk in darkness lest you misrepresent Me. Let Me lead you by the hand to slowly undo this fun-house mirror."

The Book of Exodus says that you shall not make images of God from inhabitants of the sky, nor the earth, nor under the earth. What does this refer to? To making God look like something out of Jurassic Park, such as a buzzard of the sky.

You know the song that goes "Bear you up on Eagle's Wings?" I'm not going to mock those people who like it. Some people really like it and that's okay. But the actual Hebrew doesn't refer to "eagle" but "buzzard". A flying rodent. So imagine being covered by the wings of an animal with decaying meat on its talons! I just ruined the song for everybody.

Even virtue can become an idol, as Thomas Aquinas wrote. So can wealth, reputation, honor, health and power.

Wealth: Money is a medium of exchange, an external, very surface thing. And if you idolize wealth you will become very surfacey, very superficial. You'll talk only of things, of the new leather interior of your new BMW. Your conversation will be very shallow. You will bore people.

Reputation or honor: You'll become jealous, petty if this is your main goal. "What did they mean by that!" you'll say after a party. All honor will be borrowed, you'll have none within. You'll become an empty vessel of other people's good opinions of you.

Power: You'll become monstrous, scary. Both political parties have their representatives: see Richard Nixon and Hillary Clinton. Other people will know that you only want to use them as a means to an end, the end being their goal of gaining or keeping power.

Health: You'll become a hypochondriac. The anti-aging idol is a mask often for a great fear of death, for the lack of faith in an after-life, or a lack of trust in God with the sorry account you'll have to give.

Pleasure: Can be manifested by risk-taking, by jumping out of airplanes or by the adrenalin rush of new loves. Like a Jack Nicholson. Sad. There's a need to feel alive but only God gives life. [Me: I think the padre has seen or heard of 'The Bucket List'? Haven't seen it so I can't comment.]

Virtue - people who make their own virtue their project are tragic, and it is to miss the point entirely. They become prigs and impossible to live with. "You owe me God, I've been good. I'm bigger than God: "if You don't reward me then, that's okay because I'm more fair than You."

Concerning today's gospel [Matt 5:43-48; 'be perfect as thy heavenly Father is perfect'], recall that the gospel writers were not stenographers. They weren't taking notes as Jesus said things but were recalling what he said and what He says, for the gospels are the words of a Risen Christ not a dead man. The verses in today's gospel are of the resurrected Jesus, in His perfected humanity. The actual word in the Book of Hebrews referring to Christ's resurrection means "perfection". Christ's perfection was his death on the cross and Resurrection.

Holiness is not piety but belonging, belonging to God. A chalice used at Mass is not used outside of Mass because it belongs to God, it is used for God's purposes, it's his. I don't use it at dinner.

Concerning the commandment not to use the Lord's name in vain, back at the time it was written it probably meant not to use God's name in incantational spells, in using the power of God to serve you. Using God as a means. We may not use God to "get high on God". God is not a means to an end. We serve God, rather than God serving us. When I became a Christian, I thought God existed to solve my problems. The whole Easter people thing, living after the Resurrection, with the Cross behind us, in the past.

"Blessed are the poor" refers to three things: 1) something we have chosen - the right path 2) something God chooses to do for us 3) the present will be reversed by God who even now is in our midst.

The Beatitudes are Matthew's way of announcing the Kingdom. All of the powers of the future are present now, in Jesus, and Jesus knew this. Healings. Miracles. The promises God made to his people are being fulfilled, for the Beatitudes are about Jesus. Jesus was the poor one, the meek one, the one persecuted for righteousness' sake.

I have a theory on miracles. This is my idea, not church teaching, but I see miracles as a breach between the present and future time. The future breaks into the present, and this is possible because God is beyond time, all the future is as the present to Him.

The Beatitudes are not admonitions to be followed, as if we have to ask ourselves if we make too much money. Is $25,000 a year too much? Am I poor enough to enter the Kingdom of God? $15,000 a year? Jesus is not laying down a stricter law than Moses. They are a promise. Otherwise legalism will enter in, which allows us to control God. Security.

The poor know their need of God. They suffer the consequences of following God. Christ suffered on the cross by his fidelity and thus earned the name Son of God when he was nailed to the cross. The name of God is revealed as "suffering love", not "dominion" or "power". 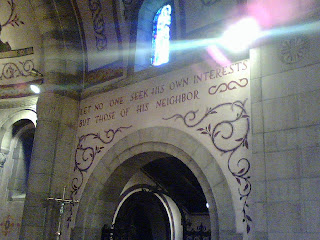 "Vain" means empty, vapid, meaningless, pointlessness. Jesus became vain - emptied himself - for our sake. He embraced the pointlessness of life and thus made it meaningful. We can't avoid taking up our cross. Trying to get to Heaven without going through the cross is equivalent to taking the Lord's name in vain.