My Own Field of Dreams Connection

1927. An iconic year for baseball, the year of the "Murderer's Row", of the greatest team in history. It was also the year my great uncle played in three major league baseball games.

Sure it was a cup o’ coffee , but still a dream fulfilled. The Baseball Encyclopedia reports only three games and nine atbats; he was a third basemen who had no errors, no hits and one strikeout. He was my exact height – 5’ 10 ½ and he died a decade and change on the day before my birthday.

He played three days in May; later he was managing a Class A minor league team.

What would it have been like to walk into the past, only the past wasn't the past? To feel the dust of the little band box in Philly whipping up on that May day?

The day after he left town part of Baker Field collapsed:

"...parts of two sections of the lower deck extension along the right field line collapsed due to rotted shoring timbers, again triggered by an oversized gathering of people, who were seeking shelter from the rain. Miraculously, no one died during the collapse, but one individual did die from heart failure in the subsequent stampede that injured 50. On both of those catastrophic occasions, the Phils rented from the A's for a while while repairs were being made to the old structure. 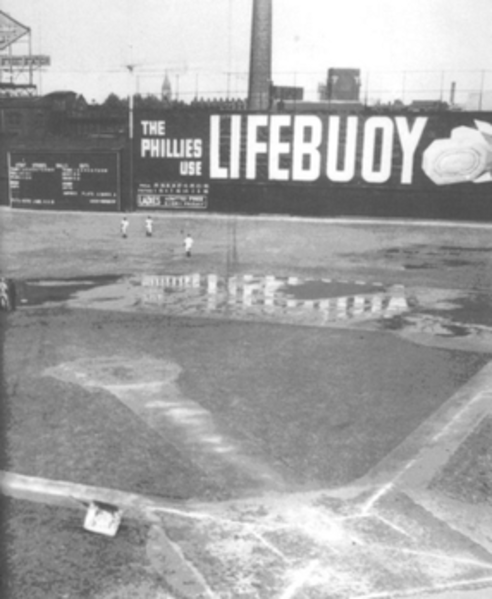