Tips to Survive Torture or Bingo (excuse the redundancy) 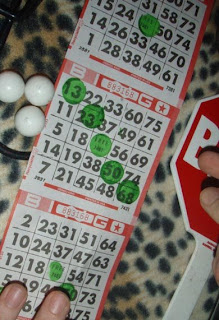 When in the course of human events it becomes necessary to dissolve the bingo bands that bind us (alliteration alert! (<--hey, that was also alliterative! <-Hey...)) in order to form a more perfect union...er, what I mean to say is that I am hereby declaring my independence from bingo and all its pomps and works.

Kim and I have decided to work part time whereby she takes a month and I take a month. This is euphoria-producing since we're both experiencing an advanced case of Bingo Burnout. (Google produces only 21 hits on "bingo burnout" but surely there ought be more. Heck, fellow blogger Jim is a victim too.)

Earlier this evening I tried to explain to Pat that I was quitting bingo because men are naturally lazy. I pointed to studies done of aboriginal tribes in which the men sit around most of the day and the women do all the work. Pat did recognize the truth in this, saying she does all the work at home. This presages a glimmer of understanding in the war between the sexes - men can't help that they're genetically disposed to being lazy.

But in fairness to myself it's not like I felt that way all night. No, I was rarin' to go at 6:45pm (late due to traffic; that's what we call 'bank error in my favor'). I hit the ground running, my wits sharp, my reflexes lightning. I could count change backward & forward. I could deal instant winners blindfolded.

Hindsight suggests part of this was due to the euphoria of having missed bingo last month for reasons unclear. I'm sure they were valid. Oh, yeah, it was my wedding anniversary! (Another bank error in my favor if'n (say like Smock) you're scoring at home.)

Yes I was fresh. Fresh from vacation and fresh from not having volunteered at bingo last month. I was tanned, rested, and ready as Bob Dole declared himself in '96 before he lost handily to Bill Clinton.

Yet around 7:45pm I noticed a slowing of my reaction time. I was counting tickets with unaccountable leadenness. I was slurring "King of the Mountain". And I couldn't think of a snappy comeback to the smart-aleck woman in the upper left corner (Kim, you surely know of who I'm speaking). I was off my game already and still had two hours to go. It wasn't promising.

But I knew what to do. I followed the instruction that I heard on Regis Philbin's show. Jim Carrey was on this morning and he mentioned how it took three hours every day to apply the make-up for one of his roles. It was so bad that he got advice from a CIA or FBI guy on how to endure torture. Part of the advice involved was never - NEVER - deny oneself food. In fact, anytime you think you're going to go mad you should eat potato chips or whatever food you love.

So I went to the kitchen and ate a brownie. It was so good (say like Kevin on "The Office").

I was also later revived when Carmen and Pat called me back to the kitchen in order to move a heavy coffee pot. This (as well as being called upon to open a jar) is something men love to be asked to do. First, it doesn't take long. Second, it's about the only thing men can do that some women can't. See how the sexes complement each other? There would be no war between the sexes if women did the work except for moving heavy objects or opening jars.

I was also amused by Carmen's outrage at being given a bad mark on her cleanliness report card. It was a bum rap for the popcorn maker had been cleaned and the checker had confused us with a previous Thursday. We floor workers bonded yet again with the kitchen workers (as if any further bonding was necessary) like fellow union workers outraged by some management scam.

After-bingo, like after-prom, was much fun. We prepared the hall for Vacation Bible School by moving a bunch of cut-outs. Matthew carried a Princess cutout and I took a pic with my cell phone but he denied usage of it on this blog, or at least he wouldn't cheerfully say 'yes' despite the fact that I told him he would not be identified by name.

Here we see Matthew obscured by a high-tech digital enhancement lest he be identified: 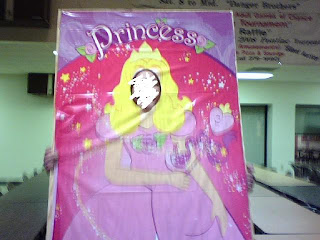 Fortunately Kim and Pat stood in the breach, offering the image below for our entertainment and again demonstrating the superiority of women. Unfortunately it was very dark in the hall by this time as someone had turned the lights off. Kim is holding a beer which makes it all the more priceless: 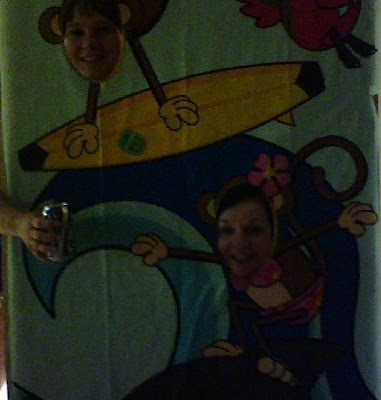