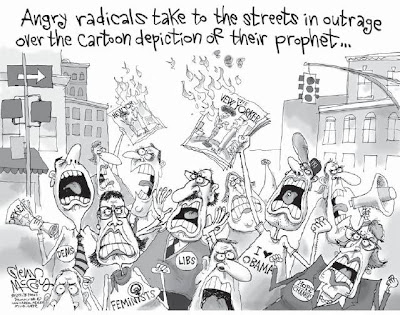 The reaction to the satirical New Yorker cover depicting Obama in a turbin and Mz. Obama in guerilla wear was far more amusing than the cover itself. To see liberals targeting other liberals over the correct words to their hymns of victimology triggered a bit of schadenfreude in me. Hoisted by their own pretard has been a common enough experience this primary season, as I'd written before. (And to see Al Gore answer to the charge of hypocrisy on Meet the Press for his ten thousand square-foot home was priceless if only because for liberals the only sin besides intolerance is hypocrisy.) We're seeing things we've hardly ever seen before, and I think it's mostly a testament to the utter lack of fear liberals feel in this extremely favorable political environment. They can afford to attack their own magazines & candidates.

The downside is that enjoying the show is the purview of those out of power, as the Republicans are now (GWB is a lame duck). But you take your pleasure where you can.

Bush routinely received far worse cartoon covers than the latest from the New Yorker, but at least the dust-up has served as a barometer of who lacks a sense of humor and proportion (is it any surprise that Al Gore failed the test during today's Meet the Press appearance?). Just like with the primary race of a black versus a woman led to preference pyrotechnics, here we have freedom of the press versus liberal piety.

It all screams out for parody but I kept procastinating despite having a blog called Parody is Therapy. Thankfully, procastination often works to our advantage and it did this time when I saw the cartoon above, which was funnier than anything I could've come up with.

It was penned by a Glenn McCoy and published in the Columbus Dispatch and restores my faith in the comic ability of this fine nation. It's one job we won't have to outsource...
Posted by TS at 12:52 PM