This may be too cynical by a half, but a few weeks ago I began receiving Newsweek magazine despite not having subscribed to it. I'm wondering if this is a free 6-month subscription such that it would run till... drumroll... November. Which is to say that I wonder if Newsweek is providing free magazines to some of us in electorally-important states in order to try to swing the election towards Obama. After all, politics is the religion of the secular set and why wouldn't they want to prostyletize? On the other hand, I admit that does sound a bit conspiratorial.

* * *
My left-of-center brother-in-law becomes incensed when he reads of corporate ill-doing. Which seems odd; I'm always surprised by his surprise. Companies are run by individuals. Individuals are fallen. Why isn't he outraged by other news, including everything from shoplifting statistics to murder rates?

* * *
Last night I was reading about 1920s/30s writer Jim Tully and how when he was a starving artist the socialist Upton Sinclair ignored him and returned his manuscript unread, while Rupert Hughes, a "reactionary" helped him turn his 100,000 word single paragraph into Tully's first novel.

Speaking of sex, least likely Jeopardy! category may well be: Lust & Religion. Be funny to hear Alex say it. The latter just came available on Gutenberg. (By the way, you can get an RSS feed and learn of new online books.)

* * *
God is often revealed in small actions. I was touched when while riding my bike yesterday someone down the street pulling out of their driveway with loud rap music playing. The sound decreased as I neared and then increased after I went by. He'd thoughtfully turned down the noise for my sake.

The Spanish blogger at Compostela writes of having recently seen My Night at Maud's, a film I remember seeing about a decade ago. I remember it having made a big impression at the time but ought watch it again since our reaction to art changes over time as Angel mentions. 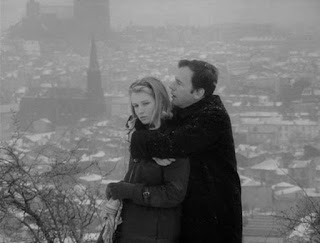 He writes of how he would have viewed it differently before his conversion (colorfully termed "Copernicano turn" via the ever interesting Babelfish translation service). 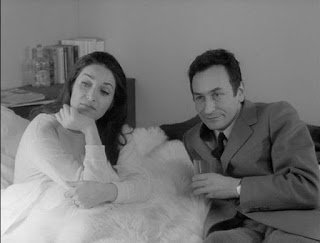 Update: I sent this email to Ham o' Bone:

After a second viewing, I was amazed by how much lying the main charater, Jean-Louise, did. I don't recall the deception in the first viewing, perhaps because I was inclined to be sympathetic given he was the believer amid unbelievers. Don't you think Maud and the Marxist friend of Jean-Louise were more likable that Jean-L & Francoise, the blonde? I wonder if that was the director's intention. Maud & the Marxist just seemed more other-directed and less self-involved. A detail is that when Maud was telling Jean-L of the death of her lover, Jean-L seems to have moved off disinterestedly towards the window and expressed no sorrow.

The other thing that blew me away was the mention on a movie review site that his blonde wife, Francoise, was a fundamentally unhappy person. She didn't seem so at all to me; the only time she appeared otherwise was when she thought he'd found out about her affair. At film's end they go off happily for a swim. Anyway, well worth another viewing!
Posted by TS at 7:43 AM