Peter Schiff talks about the need for greater US savings, and while I understand how there's a tipping point at which debt becomes too burdensome, I'm having trouble seeing the connection between savings rates and a successful economy. You want a nation of great savers? Check out Japan. They save like Ham of Bone on steroids. (Well not quite but...) And look at their lackluster economy.

In a spendthrift economy, savers seem to receive disproportionate benefit. It seems unfair: they benefit from their neighbor's spending habits by enjoying the strong economy that results from that spending - i.e. the jobs and healthy stock market -- but without giving up the nest egg.

Cokie Roberts whispered the "J" word a couple months ago during the fiscal crisis. "We don't want to become another Japan," she said and it does seems their economy has mostly flatlined since the 90s. Check out this Japan index fund chart: 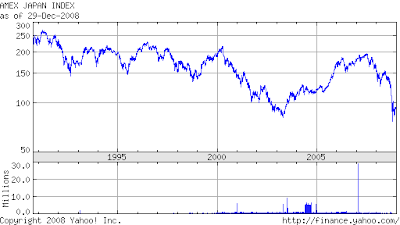 (While on the subject of things economic, I'm guessing this book probably could be reduced to simply saying "Barnum was right".)
Posted by TS at 4:11 PM

Perhaps it's about balance. The market seems driven by psychology at least as much as numerology... um, I mean quantitative factors.

Oh so true. George Will keeps saying the economy needs a psychologist more than anything else.