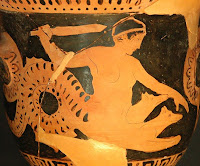 The 'vescent glow of lamps polish the gilt-surfaces of the book soldiers languidly laying about waiting their turn of service. I pick up The Odyssey and by Jove I find in Homer's epic the pages referring to the Sirens and to Scylla and Charybdis, those fascinating remnants of ancient lore. The book reads in places as modern as yesterday, the same human nature displaying itself and therefore reminding me of the patience of God (if not Greek gods) in enduring human nature.

It makes me hungry to check my library for any lit-crit books on Homer, but I forget and instead pick up the NBA book and read a quote from Halberstam's classic Breaks of the Game which makes me desirous of that book. A clear case of being in having, rather than being, mode and so I surfed to the Vatican website and downloaded a transcript of Benedict's Christmas and New Years Day homilies and saved them to read later.

* * *
Have been watching more sports lately; a return to my roots as it were. There must be something about sports burnt into the male psyche since we've been watching them for thousands of years. I wouldn't be surprised if mankind used the wheel first for amusement rather than work and fire first as an endurance contest instead of for cooking. There is something inherently inspiring in sports as opposed to politics; with sports there's always a winner, with politics no matter who wins we lose! Or so it seems. But it's no secret that the news is always news is always grimmer than the sports pages.

* * *
Heard Amy Welborn talk about her Pope Benedict on Al Kresta's show. She passed on a sense of the Holy Father's childlike wonder and lack of cynicism, and it was a profound reflection that what a relationship with God means is that we don't have boundaries anymore, because we are dealing with an infinite God, and thus life becomes an adventure.

* * *
My idea of risk-taking is drinking Newman's Own bold coffee a couple hours before bedtime, but I know someone far more risk-averse than me and it's sort of a wonder: my libertarian stepson. Be it eating healthy food, exercise, financial matters, guns, or survival skills, he's all about preparation and minimizing risk. I think his favorite Christmas gift was a "throw-in", an all-in-one knife/pen/scissors item.

* * *
Disappointed that Stephanopoulos demoted himself to GMA from This Week. A curious move it would seem, and now there's no Sunday show that appeals. I suppose it's on to Fox News. I heard Brit Hume made news recently, the good kind of news.

* * *
U.S. states have official birds, flowers, mammals, insects and musical instruments, but I bet you didn't know they also have official weather patterns. Ohio's is: "Mostly cloudy with a 2% chance of sun between 2pm & 2:10pm." Just thought you'd like to know. I'll serve no whine...
Posted by TS at 4:20 PM

On Ohio's weather, and Columbus in particular--you drove that nail home with one blow. As much as is wonderful in Ohio, and there is much, that pattern came close to killing me.

Yes indeed someday I'd like to move to your sunshine state. I'm lobbying my stepson to move there so that my wife will follow! :-)

Well, he's not *my* Pope Benedict - he belongs to everyone!

Ha! I didn't catch that pronoun but you're right he's father for us all.