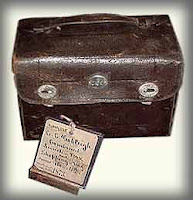 ...Why's my Bookbag or eReader Equivalent so Heavy?

From Prague by Arthur Philips:

John tapped at his computer keyboard with a dramatic rising and falling of the hands, like a concert pianist.

___
"We’re the [Marine] Corps, man. And I thank God for the privilege...The world works because people—bad people, John—believe we’d fight for anything the president says we’ll fight."

___
Todd pointed to the Chain Bridge just as its strung lights illuminated and buzzed white against the lemon-lime and pigeon sky.

___
at last, John is anointed with the soothing balm of irony: When even his spontaneous grunts are impossibly and automatically insincere, he can only laugh. As in front of a tailor’s triple mirrors, he sees the silliness of seeing the silliness of it, feels the pleasantly dry, infinitely regressing amusement he can feel at his own expense.

From The Secrets of Mary: Gifts of the Blessed Mother:


The monastic path was arduous for clever [St.] Norbert. Old habits and customs are stubborn warriors. Under the disciplined guidance of spiritually savvy monks, Norbert persevered in his attempts to encounter the silent majesty of God. Eventually, when he least expected it, Norbert began to experience mysterious energy flowing from the Blessed Sacrament hidden in the chapel tabernacle of the monastery. The divine energy invigorated him so much that he spent every free moment in the chapel kneeling before the Blessed Sacrament.

“One of the most admirable effects of Holy Communion is to preserve souls from falling and to help those who fall from weakness to rise again. Therefore, it is much more profitable to approach the divine Sacrament frequently, with love, respect, and confidence, to keep them back from an excess of fear.”—Saint Ignatius Loyola.

Saint Louis de Montfort said of Mary: “Because Mary remained hidden during her life she is called by the Holy Spirit and the Church ‘Alma Mater,’ Mother hidden and unknown.

From Drink: A Cultural History


Keats drank wine from preference, specifically claret. A letter to his brother George in America illustrates both his beautiful natural rhythm and his fascination with the red wines of Bordeaux: “Now I like Claret whenever I can have Claret I must drink it.—’tis the only palate affair that I am at all sensual in. . . . For really ’tis so fine—it fills one’s mouth with a gushing freshness—then goes down cool and feverless—then you do not feel it quarrelling with your liver—no it is rather a Peace maker and lies as quiet as it did in the grape—then it is as fragrant as the Queen Bee; and the more ethereal Part of it mounts into the brain, not assaulting the cerebral apartments like a bully in a bad-house looking for his trul and hurrying from door to door bouncing against the wainscot: but rather walks like Aladin about his own enchanted palace so gently that you do not feel his step.”

From The Pregnant Widow by M. Amis:


Sexual intercourse, I should point out, has two unique characteristics. It is indescribable. And it peoples the world. We shouldn't find it surprising, then, that it is much on everyone's mind.

Fifty comes and fifty-one, and fifty-two.. And life thickens out again. Because there is now an enormous and unsuspected presence within your being, like an undiscovered continent. This is the past.