From Chesterton's dedication of "The Man Who Was Thursday":

Weak if we were and foolish, not thus we failed, not thus;
When that black Baal blocked the heavens he had no hymns from us.
Children we were - our forts of sand were even weak as we,
High as they went we piled them up to break that bitter sea.
Fools as we were in motley, all jangling and absurd,
When all church bells were silent our cap and bells were heard.

Not all unhelped we held the fort, our tiny flags unfurled;
Some giants laboured in that cloud to lift it from the world.
I find again the book we found, I feel the hour that flings
Far out of fish-shaped Paumanok some cry of cleaner things;
And the Green Carnation withered, as in forest fires that pass,
Roared in the wind of all the world ten million leaves of grass;
Or sane and sweet and sudden as a bird sings in the rain--
Truth out of Tusitala spoke and pleasure out of pain.

Chesterton to Dorothy Collins in 1927:

From "Acquainted with the Night: Excursions Through the World After Dark" by Christopher Dewdney: 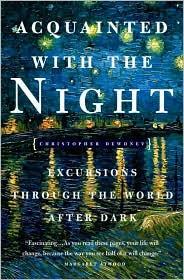 I love night, some of my earliest memories are of magical summer evenings, the excitement I felt at night's arrival, its dark splendor. Later, when I was eleven, there were hot summer nights, especially if the moon was bright, when I felt irresistibly drawn outside...After quietly shutting the bad door behind me, I was free, deliciously alone in the warm night air. A bolt of pure electric joy would rush through me as I stepped into the bright stillness of the moonlit yard.

We lived at the edge of a forest, so I'd hop the rail fence and blend into the trees. Even without moonlight my night vision was good enough to avoid stepping on twigs and dry leaves. Imagining I was a puma or a leopard, I'd walk silently through the forest, a creature free in the North American night. Although I didn't know it at the time, by exercising my night vision I was proving Victor Hugo's maxim "Strange to say, the luminous world is the invisible world; the luminous world is that which we do not see. Our eyes of flesh see only nigh."

...while Australian poet Frank S. Williamson, in a sort of reverse personification, described his lover as if she were the night:

She comes as comes the summer night,
Violet, perfumed, clad with stars,
To heal the eyes hurt by the light
Flung by Day's brandish'd scimitars.