Gleanings from the RSS Reader

Since finding a new and different interface with which to enjoy Google Reader, I've been savoring a fountain froth of posts and feeds. I bring the iPad to work and it sits quietly, scarcely breathing, far from its natural habitat and sluggish as a reptile in winter. It can only be a receptacle for my thoughts at work while at home it becomes enlivened by the grace of wi/fi, much as the Warren Beatty character in Heaven Can Wait suddenly jumped up when a new soul came to live in him...

Here are a few tidbits: 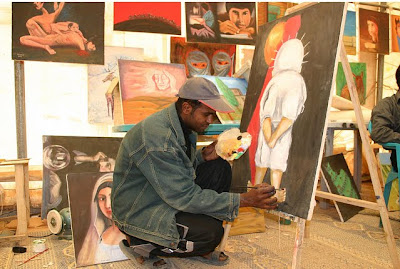 Despite the hardship, some refugees have found a creative outlet for their anguish. This man has learned to paint under the guidance of other artistic refugees.

After Saddam Hussein's regime was toppled in Iraq in 2003, groups of refugees who had lived in the country for many years tried to leave the chaos and lawlessness that soon ensued. Hundreds of people started fleeing to the border with Jordan, including Palestinians in Baghdad and Iranian Kurds from the Al Tash refugee camp in central Iraq.

Aside from a few Palestinians with family connections inside the neighbouring country, the refugees were refused entry and free movement in Jordan. Thousands were soon stranded in the no-man's land between Iraq and Jordan or at the desert camp of Ruweished, located 60 kilometres inside Jordan.

Since 2003, Palestinians, Iranian Kurds, Iranians, Sudanese and Somalis have been living there and suffering the scorching heat and freezing winters of the Jordanian desert. UNHCR and its partners have provided housing and assistance and tried to find solutions – the agency has helped resettle more than 1,000 people in third countries. At the beginning of 2007, a total of 119 people – mostly Palestinians – remained in Ruweished camp without any immediate solution in sight.

The camp was closed on November 5th 2007, date where the last family resettled in a third country.

While I appreciate the argument regarding the dignity of work, it seems to me that the ELR idea is actually a false solution to the problem. The dignity of work, it seems to me, stems from doing work which actually provides value either to you or to others. I don't think that doing make-work in return for a guaranteed income will provide a sense of dignity to the worker -- and indeed, it may serve to destroy his sense that working has dignity in the longer term, leading to a "they pretend to pay us and we pretend to work" attitude that will be carried through into "real" jobs later on, making it harder for him to provide for himself and find satisfaction in his work.

It's interesting to see the value of work less as what the worker himself sees as its value, but the value someone is willing to pay for it. The latter can vary from the former; a sanitation engineer arguably has a more important job than a football star but the value people place on their respective professions is startlingly different in terms of pay.

This picture of the twenty-six martyrs of Japan is eerie; it's so strange to see such a multiplication of crosses: 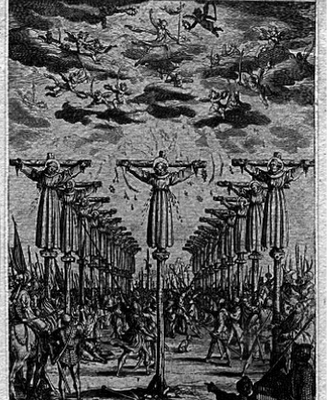 Origin on Scripture from Frederick at Late Papers:

"The more we read on, the higher rises the mountain of mysteries. And as someone who sets out to sea in a small boat is less afraid as long as the land is near, but when he has gradually moved out into the deep and the waves get bigger, and he begins to be tossed up on the crests and plunged down into the troughs, then indeed is he seized with fear and terror for entrusting such a slender craft to such great waves; the same seems to happen to us who, with little merit and slight talent, dare to enter into so vast a sea of mysteries.... For everything that happens happens in mysteries" (Origen: Spirit and Fire, 90).

Msgr. Charles Pope on the difference between seeking healing versus seeking relief.

Mark Hart the Bible Geek: "The joy of 'knowing Christ' is less about us knowing Him as it is realizing (and rejoicing) that He knows, loves and saves us." (Lk 10:20-21)

For in some beastly way this fine laziness has got itself a bad name. It is easy to see how it might have come into disrepute, if the result of laziness were hunger. But it rarely is. Hunger makes laziness impossible. It has even become sinful to be lazy. We wonder why. One could argue, particularly if one had a gift for laziness, that it is a relaxation pregnant of activity, a sense of rest from which directed effort may arise, whereas most busy-ness is merely a kind of nervous tic.

How can such a process have become a shame and a sin? Only in laziness can one achieve a state of contemplation which is a balancing of values, a weighing of oneself against the world and the world against itself. A busy man cannot find the time for such balancing. We do not think a lazy man can commit murders, nor great thefts, nor lead a mob. He would be more likely to think about it and laugh. And a nation of lazy contemplative men would be incapable of fighting a war unless their very laziness were attacked. Wars are the activities of busy-ness.