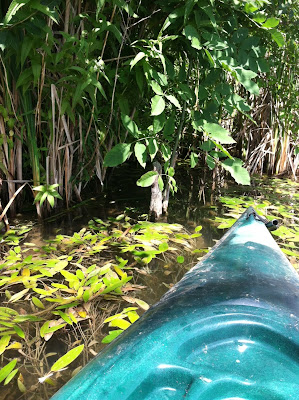 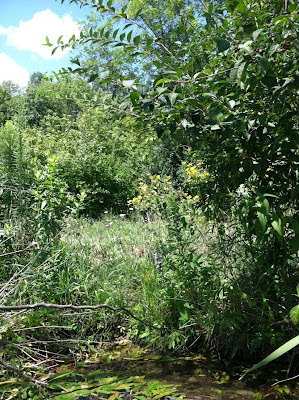 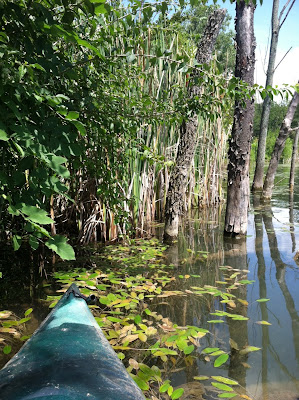 I feel the sudden euphoria of gap-toothed freedom finally ahoy'd. Land sighted after a run of turbulence. Went to the lake and rowed between the cattails. Four or five fellow boaters today; we all know a good weather day when we sees one. 74 degrees and sunny, pluperfect. Saw a lady reading a book while smoking a cigarette on her craft, anchored to the shoreline. The very picture of bliss. I thought about how there isn't a better place on the planet to read, out there on the water without distractions.

Makes, what a difference a day. Yesterday was cold and damp, today (Sunday) lively and sunny. Now I'm under the poplar on the hammock, enjoying the svelte weather while my grandson sleeps. (A precious time this, just as it's also precious when he's awake.)

No reading when Sam's on the march; he has a full slate of activities for me and I'm congenitally unable to say 'no' to him. Basketball, wagon-pulling, pool-swimming: I'm plumb wore out now and am particularly desirous of a soft bed and a good book. I pull evasive maneuvers on the mosquitoes and silently mourn the death of the London Olympics.

My approach to the Olympics has been hit or miss. A bit there, a bit here, without much sustained viewing though grateful for its presence. I like how the Olympic bodies are shaped by their sport - one couldn't mistake a gymnast for a basketball player or a weightlifter from a swimmer.  They seem to embody, literally, the essence of their respective sports.  Their game to some extent molds their bodies (environment) but also their bodies pick their sport (heredity).  Olympic athletes seem to showcase the "variety of saints", to use a metaphor. Neither could one confuse a St. Jerome with a St. Therese.

I like the track and field and basketball and swimming even though there are far too many qualifying events. Just get us to the finals, pronto. The gymnastics seems overly long but also worth watching if you can pick your spots. The women's beach volleyball shows again that sports determine the bodies - big thighs and small breasts help power those girls above the net.

What I long for with the Olympics is hardly possible these days. It's to simply watch it all. To soak in it the way I did in, say, 1976.  I had time to burn then and so it was nothing to become truly immersed in the games. Now I try to split my attention so many ways which is ironic given how on paper unbusy my life is compared to much of humanity. It seems surprising that I don't seem to have time, for example, to watch a movie every week.  And I think there is something missing from having immersive experiences, be it with prayer or art or what have you.

I play the Latino station in homage to Hilton Head.  It also reminds me of a recent bike ride in the heat not long afterward when the sun was so intense and I remember vividly that remarkable Queen Anne's lace growing despite the drought in especially heat-prone areas along the sidewalk: uncle Mark was unromantic: "that's why they call it a weed." It can survive adverse conditions. He has a point but I prefer to think of it as a flower misunderstood. 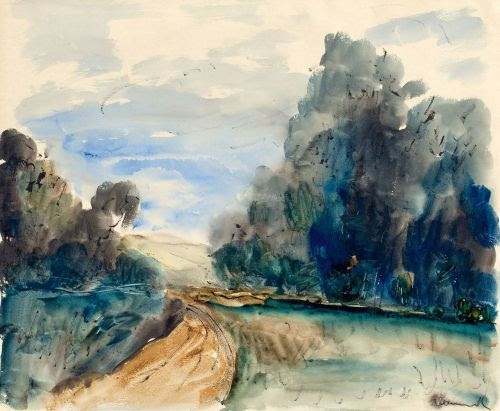 Meanwhile the sun dyes the sky with orange. The light ricochets and repents, sails and suggests. A variety of trees of all maturities enrich the landscape. Oh Ohio, I love your trees even though they all bespeak such transience! As the years pick up speed the seasons correspondingly say sic transit gloria mundi. In southern California, where the seasons are muted, the climate might be said to symbolize the permanence of God. Isn't their symbolism best?

Tis unnervingly fall-like. Has it ever been thus? Has early August always felt this way or is this just a temporary thing, another example of the common occurrence of weather patterns sometimes mimicking those of a month or six weeks ahead?

Today the skies were Michigan blue, the humidity low and the morning sun of a September variety. Now at eve the crickets or locusts sound subdued, as they often do in late September or early October. Seems like I frittered away vacation days here and there. The only full week I took off during the first seven months of the year was at the end of July. I'm thinking of a short October trip to New Mexico. Amy Welborn's recent pictures of the place are attractive. The mesas anyway appeal to me as does the sunny, arid climate (which, no doubt, will be especially appealing in late October).

*
Shocked by news reports that Randy Travis, the singer who helped bring me to appreciate country music, was found drunk and naked. That can't be good.  He also got cited for public intoxication in February.  What I can't believe is how much alcohol it would take to drive around naked.  That's a freedom from inhibition I have trouble imagining. No wonder he crashed his car as well.  It sort of makes him more interesting, sadly. I mean before he seemed sort of predictable and devout.  Now you realize there are demons there and you root for him to overcome them and make of it a beautiful story.  Stories need overcomin', need conflict and he's got a lot of that in his life now.

*
Heard a convert (Episcopalian priest to Catholic priest) on the radio mention how he gets more out of the documents of Vatican II every time he reads them! Swears by 'em! Makes me want to get them out and peruse. Mother Angelica said of those same documents read like Scripture and they do.

*
Fascinated by the inner lives of the parishioners of a local Byzatnine parish. Fr. T gave a very short sermon (2 minutes?) on gratitude. Meanwhile I couldn't take my eyes off the sight of two people, aged 140 together, wearing the Roman wreathes of Byzantine marriage crowning. They both seems like stars in the Byzantine intergalactic system, him driving 50 miles one way three times a week for liturgies (he's a cantor) and she a erudite OSU professor with a bright smile.
Posted by TS at 7:53 PM