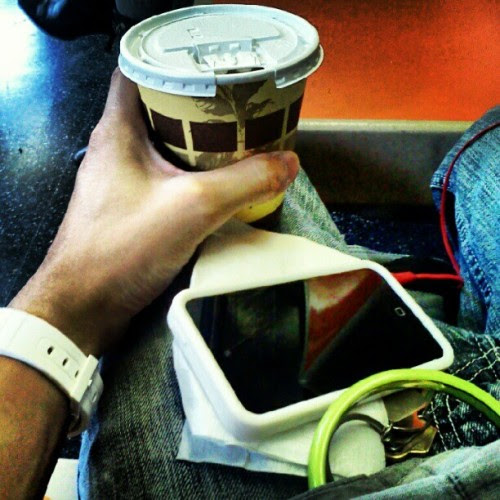 There's a Youtube video making the rounds of a guy in a state of physical ecstasy over trains. He's just really likes train sets and he went to some train trade show and was overjoyed and his rapture was captured electronically.

Willits has a positive view of hobbies and the small pleasures of life, calling them "gifts from God." He mentioned how one of his joys used to be reading fiction and that now he's getting back into it. He invited callers to tell him what gives them momentary joy or happiness. It's kind of unusual to hear that on Catholic radio, if only because often the message (understandably) is that we find our joy in God and that we should form a sense of detachment from earthly things.

Willits mentioned ministering to a paraplegic who, on the surface, might not have a lot to be thankful for but who was intensely fascinated by planes. He'd watch five straight hours of aviation documentaries every Wednesday night. Some might call that interest trivial and "non-productive" towards the goal of Heaven, but you could also look at it as a gift from God, as this earthly life is.

It seems as though my priorities have shifted a bit when it comes to owning things. I'm less sentimental and souvenir-oriented. I'm as rabid as anyone when it comes to new gadgets, devices like the Keurig, the iPad, the Kindle. But at least I've lost some of that huge desire to own things like books or land or a large desk.

I used to have two big desks, one with sentimental value attached since it was given to me by my parents. But eventually Steph talked me into getting rid of them both, for space reasons and because I never used them. Circumstances change and our need for things comes and goes.

I used to love my desk and used it every Friday night to write and dream and drink on. The desktop was there but now with the iPad I can write anywhere so the desk became something of a throwback to an earlier area, a symbol of my bachelorhood and Friday night pseudo-bachelorhood. A souvenir of a previous age. But when we converted that bedroom to the grandchildren room it made no sense to stick with it. I've mostly totally forgotten about it until now, when I think back to those dark nights watching the moon crisscross the sky through that bedroom window.

Books! I have too many. I can't imagine moving them, I'd have to give away half or more. It seems they multiply like rabbits. The Kindle came along with perfect timing. I'd had my dream of ceiling-high wood bookshelves, a room of wonder, and so now it feels pointlessly burdensome to my heirs to have them have to go through all that stuff. At first when I got my Kindle I felt that ownership sensibility, the fear that I would collect a great number of books and then my Kindle would break or amazon would stop making them or some other disaster would befall. But now I'm more loosey-goosey. I don't sweat it. There will be some sort of device. Or I can always read the physical books I have now - I have a lifetime reading supply just in those tomes.

Land seems less useful too. When I was younger I desired a view, an expanse of Big Yard that extended to the horizon. But I learned, after buying our current house, that land only satisfies for awhile. The capacious backyard we bought now feels crimped, as I suspect would - after a couple years - the next house's yard, even if it were acres. It's all what you're used to and I don't intended to get on that treadmill, constantly upping the amount of acres we "need". Certainly privacy was always my main goal and the tall trees on the sides have pretty much delivered that. I choose sun and privacy over a nice view and forested acres, as nice as the latter might be.

My likes seem to be moving to more transient things: a beer, the sun, fiction, vacations, new technologies: all of these last but a season, or a night, and fade. But gifts they still are.

Read a nice quote from Pope John XXIII about the crucifix. I get a consoling feeling about the crucifix as well and it's the first thing I see every day as well. I kind of thought it was cool that I had something in common with a holy person, that we both are strengthened by simply seeing the physical object of a crucifix. I kind of like it that Popes and saints use physical objects like bibles and crucifixes and prayer books and religious art. I like that even they, spiritual giants, feel the same sort of surge of joy, that they don't simply have a relationship with Jesus that is solely based on high-level, esoteric contemplation/communication.