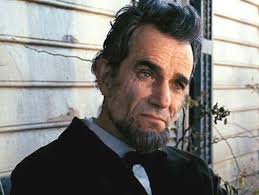 Saw the movie "Lincoln". It was decent if a half-hour too long. Pious and overly devotional in some stretches, I tend to be wary of the nursing of black grievance (which is already stratospheric). But then every ethnic group thirsts to feel saintly and sinned against. Daniel Day Lewis, who played the prez, was fabulous. Gosh you just feel like he captured the spirit and mannerisms of Lincoln despite the lack of any proof thereof given the absolute dearth of Lincoln video. Too much screen time for Mary Todd. Feels like Sally Fields has something on Spielberg, or maybe he just felt like these days you have to be inclusive by not having a mostly-male story. Tommy Lee Jones was his over-the-top quasi-reptilian self. Certainly the movie highlighted a piece of history I didn't know existed, that of the incredible exertions Lincoln went though in order to get the 13th Amendment passed in the House. Had no idea it was that difficult to get it done.
Posted by TS at 9:09 AM