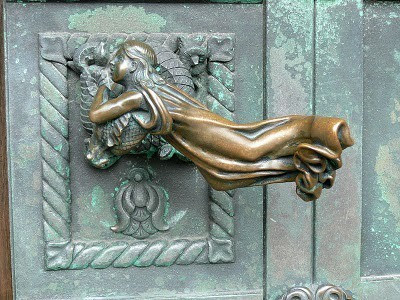 I think the message of the gospel has two primary obstacles: for some people the news is too good, and for others the news is too bad. The cross is famously an obstacle, especially the part about carrying our crosses. We want to be gods now. St. Ireaneus, seventeen hundred years ago, wrote: "For we cast blame upon Him, because we have not been made gods from the beginning, but at first merely men, then at length gods."

More surprising perhaps is that sometimes the good news is too good. A brother-in-law is skeptical about the Resurrection simply because it seems too good to be true and it's what we want to believe. A lot of people refuse, for whatever reason, to accept good fortune. That we get something for nothing which is the essence of life itself - we were all given physical life itself without purchasing it in any way. And on a spiritual level, grace deserved is an oxymoron and thus is not grace. And Holy Communion is rejected by some Protestants because it's too good to be believed.

This past Sunday reminded me of the difficult-to-believe truth of the one Body of Christ of which we are all members. I liked how St. Paul taught this “one Body” so strongly because in fact his initial encounter with Christ was on this very subject: “Saul, Saul, why are you persecuting Me?” Paul sure came by that teaching honestly and with great back-up authority.

Last night we watched an impressively good television show called Justified. Set in hardscrabble Harlan County, Kentucky, the acting is pitch-perfect, the dialogue keen and the storyline interesting. It's so rare when I see anything that well-done on television, and seeing someone so good at their work promotes a feeling of relaxation and inspiration in me. Excellence is charismatic and it's nice to fall into expert hands, even be they those of a television producer.

Did a 30-minute run at the gym. Ran by many folks working out on the weight machines and treadmills so diligently. Ruthlessly youthful, they dotted the landscape like reminders of my past, of college, except with shorter, form-fitting lycra shorts. Made me miss my own youth and feelings of exuberance that attended it, feelings not disconnected from great physical fitness and physical strivings of a much more intense nature than I was currently engaged in. One girl looked like she was in the death throes of agony, sweating profusely but with a holy sort of look of striving on her face. Sweat like tears drenched her face, and her eyes and posture were like that of the Virgin on the Via Dolorosa. I wondered how far afield simple striving is from spirituality and whether they were in fact the very same thing. The palpable striving to please God is a very rare thing, witness how touched He was when a prostitute, no less, wept on his feet and dried them with her hair. Who was Mary Magdalen but all striving, all hunger? ("Stop clinging to me," Jesus had to say.) How much of spirituality consists of not feeling full?

New novel set in Cincinnati was reviewed in the paper today. From the Dispatch: “The author's Cincinnati - a place where residents 'make a virtue of grittiness, take pride in not living in some cleaner, wealthier, wussier city.'” Hmm, Cincy doesn't seem that unclean and there are wealthy areas. I would've thought the author would have the residents take pride in the absorbing the (relatively) hot summers and cold winters. I suppose I'll download the first chapter and see if it's any good. Reading a novel simply for the setting seems akin to watching a basketball game for the cheerleaders. It just doesn't figure in much.

Tragically, I had to put my Knox Bible out of reach because our dog Buddy was eating books next to it (a Downton Abbey book was a recent casualty). I don't think he's a particular fan of thin bible paper but I'd rather not find out. Sadness untold because I rather liked having such a fresh (to the point of wild) translation so close to my recliner. My druthers on Sunday is to read the readings of the day not only as presented in the missalette but in versions sundry, like the stiff upper crust Douay, the guilelessly transparent Jerusalem, and the quirkily robust Knox. Those seem to be the three renditions significantly interesting versus the New American text, the latter being pretty close to the lectionary readings.

Spent some time yesterday reading Ireaneus on Logos, specifically the full context of his case against those who wouldst be gods first:

Irrational, therefore, in every respect, are they who await not the time of increase, but ascribe to God the infirmity of their nature. Such persons know neither God nor themselves, being insatiable and ungrateful, unwilling to be at the outset what they have also been created—men subject to passions; but go beyond the law of the human race, and before that they become men, they wish to be even now like God their Creator, and they who are more destitute of reason than dumb animals [insist] that there is no distinction between the uncreated God and man, a creature of to-day. For these, [the dumb animals], bring no charge against God for not having made them men; but each one, just as he has been created, gives thanks that he has been created. For we cast blame upon Him, because we have not been made gods from the beginning, but at first merely men, then at length gods; although God has adopted this course out of His pure benevolence, that no one may impute to Him invidiousness or grudgingness. He declares, “I have said, Ye are gods; and ye are all sons of the Highest.”﻿1 But since we could not sustain the power of divinity, He adds, “But ye shall die like men,” setting forth both truths—the kindness of His free gift, and our weakness, and also that we were possessed of power over ourselves.

St. Ireaneus makes the case that, to quote Jack Nicholson, “we couldn't handle the truth.”:

Of course it's a moot point given that it's ridiculous for the creature to complain that the Creator didn't make him perfect when the Creator himself came down to subject himself to our imperfections to the point of dying on a cross. Certainly makes the whole argument ludicrous since it's far more impressive for the Creator to come down and suffer than a created one to do likewise.
Posted by TS at 11:12 AM

I've been watching Justified since it's beginning. If you can get hold of the back episodes, I think you'll enjoy them.

Yes been trying to find back episodes but they're not airing repeats on my cable nor do they seem to be on Netflix.

I did a little search and it appears they're not making them available for free. A few episodes can be found, but you need to start from the beginning. You'll have to buy the dvd's unless you're willing to wait a while.

Just bought season 1 on dvd. Fortunately it was free since I got a promotional credit for, ahem, buying a television via amazon. Yes broke down and replaced my otherwise fine 38-incher.

How big is it and what kind?

Vizio 60 inch. Almost went 55, but figured I'd go whole hog and be done with upgrades. We're pretty much at max size given our distance from tv in that room.

Heh. Yeah, mine's 50 something I think and I can't see getting anything bigger.