How Long Can Your Blog Go?

So I looked at 45 Catholic blogs that began a decade or more ago, more or less at random (looked at blog lists on blogs), and assigned them birth and death dates. Death dates arbitrary; if someone blogged once or thrice in a year that year does not count.

Some blogs I couldn't easily track down (like Dylan's) so they weren't included.

The average lifespan is a surprisingly healthy 10 years. 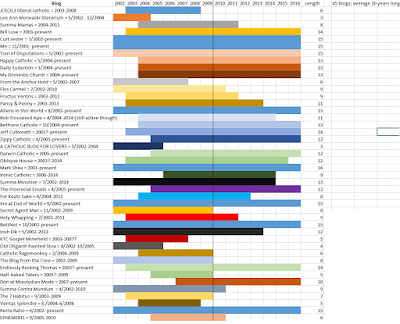 I marked a bold line at the end of 2009 because it seems like that's when a lot of blogs fell off or began to.  I suspect the rise of Facebook at that point: 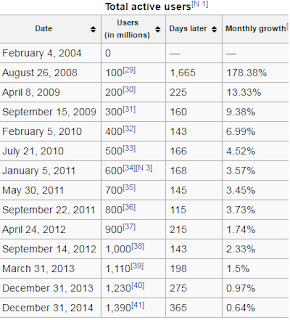 I think RectaRatio.blogspot.com comes as the biggest surprise to me.  It looks like a labor without ego - no writerly voice at all, just a pious commonplace blog of clips and pics, of prayers and saints - for going on 15 years! I can't recall pious blogs like that lasting too long, although theoretically it should be easier since you don't have to create content but borrow it.  On the other hand I doubt these blogs get many props or hits, so there's less incentive.
Posted by TS at 3:27 PM

Lots of familiar names there.

We're coming up on, or have recently passed, our 11th anniversary, and looking back, our top year for posting was 2006, with more than 500. Those were the days when a thought would pass through our heads, and we'd take the time to log in and blog it. Now all that impromptu stuff goes on Facebook, and most of the discussions happen there.

We few, we happy few, we band of bloggers!

Yes, we happy few! I post less too, often one-liners on Twitter instead of blog posts. I gave you credit for 12 years since you blogged at least part of 12 calendar years.

Well, Gerald Bugge's blog was stopped by his actual death (may he rest in peace) and the Holy Whapping was college kids who graduated and moved on, so some of the blog deaths had extraneous causes.

Dang, I should've included your blog!

Karen of the Anchor Hold blog was also stopped by her death.