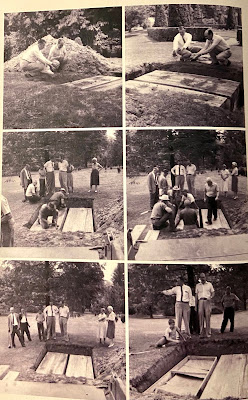 Reading some early history of Miami U. in Ohio and it’s fascinating how history repeats.  For example, student protests led to great tension between the college administrators and the students. Sounds like the 1960s, right?  Except it’s the 1840s.  But the rebellions were over markedly different issues in substance: in the ‘40s the students chafed at the university being like what a seminary is today: morning and evening prayers, two services on Sundays, religious education, etc..

In the 1960s, it started with the civil rights movement, then moved to anti-war, then to women’s lib and gay liberation.

Miami’s presidents also seemed to parallel in some ways with America’s. In both cases the first president was a revered, charismatic figure: George Washington and Robert Hamilton Bishop. Both were authoritarians but with a merciful streak that gave play to mild rebellions.

Then came the second presidents, both of whom were monarchical but without much mercy or tolerance.  George Junkin would’ve approved of what John Adams did - to make it a crime to criticize the president.  Junkin resigned after only three years and Adams would become the first one-term president. Junkin said a “monarchical system best suits a college administration, with the President serving as King” and Adams leaned more closely to favoring monarchy than the other Founders. The president, E. McMaster, was of the same philosophy as Junkin.

After student protests, rebellions and a greatly reduced student body, the board of trustees capitulated and appointed a “liberal”, William Anderson, who joined a fraternity to show he was one of the boys.  This was like Thomas Jefferson’s becoming president in that Jefferson believed in a more grassroots democracy.

The big American shockwave came not with Jefferson but with Andrew Jackson, who was far more of a populist and a break from the Founding generation of scholars.  Adams and Jefferson feared the beginning of the end of America with his election in 1828, just 40 years after Washington was inaugurated president.

And in Miami, the big break came 40 years after Bishop was made president, when the inmates (the kids) began running the asylum, basically choosing William Anderson via their antics and protests.

Was Jefferson's view of small 'd' democracy right? Or was Adams'? Too soon to tell but given human nature both views are ineffective.

I recall strolling center campus in the early '80s, right outside the holy temple of the honors dorm which was named in honor of that first President, a Scot.  (Interestingly, on a podcast I was listening to recently mentioned the Scots as having saved civilization, or at least done everything for us from the Scottish enlightenment to Scots literally teaching some of our Founding Fathers in the early grades, in the mid-1800s.)

On the northwest side of campus there are the Formal Gardens with a large memorial stone from Scotland placed in 1989 for Bishop. His actual grave is somewhere nearby; he was a fan of Indian mounds and wanted his to be a small mound without a stone. A nice touch of eccentricity and one that made me want to try to find the location, like a geocache.  I looked on Google maps, studied old pictures when his remains were transferred there (62 years ago yesterday), and tried to decipher vegetation clues and disturbed earth. Yes, probably not the best use of time... 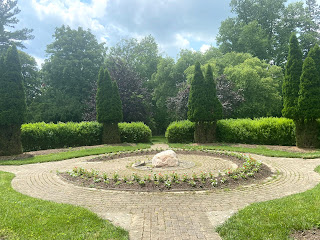 From a poster on “Find a Grave” site:

I think there are Blue Bells on the grave in the formal gardens. I found the grave while looking for God.  In my junior year, Bishop Hall, an honors women's residence saved my life. I honor our first president, man of faith and proponent of freedom, including for slaves. Thank you, Dr. Bishop and wife Irene as well, and all those who taught them well in Scotland and in America.

Elsewhere on the 'net:

Upon his death in 1855, Bishop was buried alongside his wife in Cincinnati, but was relocated on June 20, 1959 to an unmarked grave close to the Formal Gardens. If one looks closely past the circle, one can see a slight raise in the ground, like pregnant grass, behind Bishop Circle. It resembles an Indian Mound.

I tried to find online the mound in which he was originally buried, studying the topography and Google street views of the old Farmers College (then Ohio Military Institute, then a high school, then...). 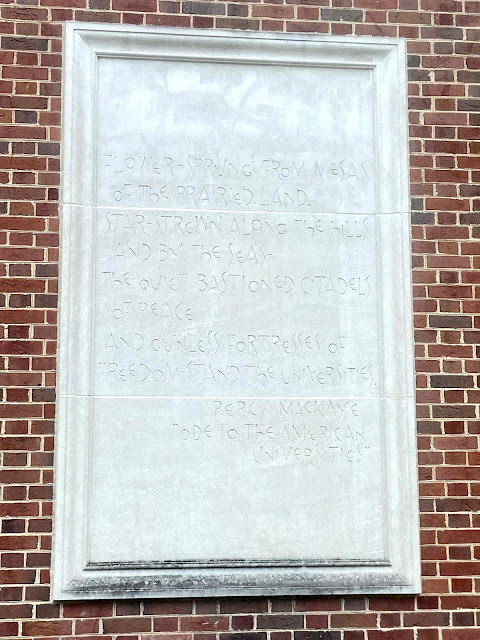