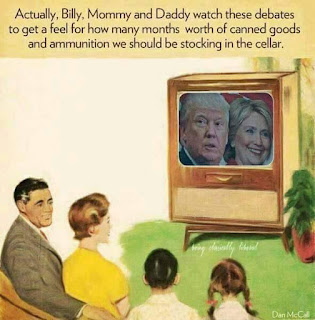 So the debate o' debates last night.  As someone wrote on WaPa, how did anyone watch debates pre-Twitter? The snark is needful and it's hard for me to take these candidates seriously.  Hillary chiding Trump for secrecy is like an Onion parody, as was her pious talk about cyber-security.  And Trump is ... well the country seems so cry-for-help desperate for change that it probably wouldn't matter if he mooned the audience.

Trump blaming the microphone and moderator for his failure is revealing as far as reflecting his core constituency of folks who are prone to blaming others and conspiracies for unfavorable outcomes. Unseemly from a billionaire "can do" sort of guy. The so-called great negotiator couldn't negotiate a favorable moderator.

Minute 15 of debate I thought: "Man, I guess Trump didn't need to prepare for debate."

Minute 60: "Man, Trump really needed to have prepared for this debate."

The wheels, they did come off.  Shrillary's rope-a-dope worked; second half Trump was punch-drunk.


‏@fredsprinkle  We have reached peak irony as a civilization.

‏@linorulli   9 months from now, there should be an increase in births and kids named Lester.

@Brendan_Fitz   The winner of last night's GOP debate was clearly the apocalypse. 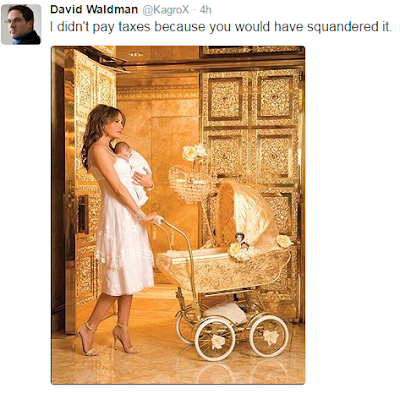 The key to unlock the mystery of why we have two candidates who can never say they're sorry becomes visible by this simple Shelby Steele quote:


The problem, as always happens in human affairs, when you acknowledge a wrong, you say, 'yes, it was wrong, and we’re going to move away from that', the price you pay is that you lose your moral authority. And I think this is again one of the most important events in American history, that after the civil rights movement Americans, white Americans, but more importantly than individuals are institutions, lost a considerable amount of moral authority, because now blacks and other minorities could look at them, could point the finger, and could say, well, by your own acknowledgement, by your own acknowledgement you’re admitting that you—that America did us wrong. And so the moral authority that whites lost shifted to minorities and became extreme—it became an important source of power for minorities. White guilt is black power.

Eureka.  You lose your moral authority and power if you admit you're wrong, hence Trump and Hillary's keen reluctance to ever admit they'd committed an improper action.  Both power mad, and thus the lesson of recent history is that admitting being wrong leaches power.
Posted by TS at 4:45 PM No comments: 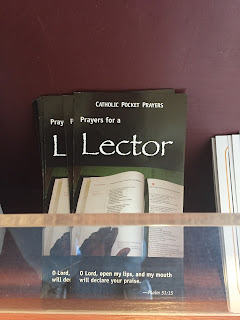 Back of church at St. Pat's but what do my wandering eyes see?  A prayer booklet for lectors! (Not the Hannibal kind.)  Apparently they need lots of prayers.

I was in a hurry so didn't look in it much but I can imagine one would go:


"May he or she read like the wind!
May they have sufficient saliva to properly enunciate the most difficult Hebraic words.
May they not stumble on the way to the lectern, nor light themselves on fire accidentally via a candle.
May they speak not too fast, nor too slow.
May all their syllables come out in a syllaballically impressive fashion."

Posted by TS at 11:34 AM No comments:
Newer Posts Older Posts Home
Subscribe to: Posts (Atom)