Read something recently (an oral history of the short-lived magazine Inside Sports, familiar to only those of us of a "certain age") that created a sudden and almost holy interest in the boxer Randall “Tex” Cobb. Felt a reverence for the otherworldly story of a throwback.

Cobb was physically courageous and a practitioner of Stoic virtue when it came to taking a punch. He got in the ring with better, quicker (quicker a euphemism for “African-American”) boxers and took a beating but would not go down. And he won a fair amount of the time so he was no hack.

But more impressive was how he came to the rescue of a sportswriter - yes, a writer - who’d found himself in a predicament in a bad part of Philly. The writer was nearly killed, but Cobb came to his rescue against a mob of twenty or thirty and for his trouble received a broken arm via a tire iron. It cost him the chance to box Mike Weaver. In other words, an athlete risked a big payday to save a writer. Greater love hath no athlete...


With slow rotation suggesting permanence
Nor darkness to purify the soul
Emptying the sensual with deprivation
Cleansing affection from the temporal.
Neither plenitude nor vacancy. Only a flicker
Over the strained time-ridden faces
Distracted from distraction by distraction
Filled with fancies and empty of meaning
Tumid apathy with no concentration
...
Not here the darkness, in this twittering world.
...

Will not stay still. Shrieking voices
Scolding, mocking, or merely chattering,
Always assail them. The Word in the desert
Is most attacked by voices of temptation,
The crying shadow in the funeral dance,
The loud lament of the disconsolate chimera. 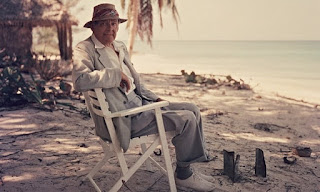 I Came for the Schadenfreude but Stayed for the Sympathy

I came for the schadenfreude but stayed for the sympathy.  Finished Donna Brazile’s Hacks and was unexpectedly moved by it, particularly the hell she went through with the DNC hacks and the fear and paranoia that ensued. Even her beloved dog died. Sure, some of hell was self-inflicted, like the infamous gift of debate question to Hillary, but then we all self-inflict pain.

Her fall from grace was so stark and humbling that she felt camaraderie with even her enemy, Trump voters:


In a way I want to thank Donald Trump for bringing me so low, because in that state of mind I was connected to my fellow Americans. Before the 2016 campaign, I had been doing well for a good long while, and then—poof!—it was over, and there was reason to think that it might not start up again. I know many of Trump’s supporters felt the same about their lives. This election burned it all down...—but after a firestorm passes what comes up first is hearty and strong.

Another interesting part was where after the election she gave the time to her students to educate her:


I wanted to know what the students thought. Since the pundits clearly had not known anything, perhaps these young people would be better at deciphering the loss than those of us who were paid big bucks to do this.

I learned two things from the students. One was that they disliked identity politics. They thought that Hillary spent too much time trying to appeal to people based on their race, or their gender, or their sexual orientation, and not enough time appealing to people based on what really worried them—issues like income inequality and climate change.

Good to hear that even on the youthful liberal side of the fence identity politics is in some quarters passé.

The other thing Brazile “learned” was risible: “the misogyny of the media”, questionable on the merits and laughable because she said in the next sentence that she’d been preaching it to the class all year long, so I’m not sure how you “learn” something you’ve been teaching. And certainly if the press had even the faintest inkling that Hillary could lose they would’ve pushed her to victory. Bad polls were Trump’s best friend because though the media was fiercely against him it didn’t gloss over Hillary’s problems.

But ultimately this was a very human book and a siren call to end the tribalism that has infected our politics and which I am often guilty.
Posted by TS at 5:45 PM No comments:

Interesting that I read the following by Peter Hitchens (from his book “The Rage Against God”) so soon after a Mark Helperin passage about how Bach and Mozart wrote classical music that mixed joy and sorrow since for them death was omnipresent.

Here Hitchens speaks of the time before he converted from atheism:

I sought out and preferred buildings without dark corners or any hint of faith in their shape..I did not know exactly what I was seeking or avoiding, but it was well described in John Buchan’s story Fullcircle. A character who lives in a seventeenth-century manor house muses by his library fire:

In this kind of house you have the mystery of the elder England. What was Raleigh’s phrase? ‘High thoughts and divine contemplations.’ The people who built this sort of thing lived closer to another world, and thought bravely of death. It doesn’t matter who they were—Crusaders or Elizabethans or Puritans—they all had poetry in them and the heroic and a great unworldliness. They had marvellous spirits, and plenty of joys and triumphs; but they also had their hours of black gloom. Their lives were like our weather—storm and sun. One thing they never feared—death. He walked too near them all their days to be a bogey.

How close to what Helperin had his protagonist muse on in the novel “Paris in the Present Tense”:

“The difference in the spirit of one age with the spirit of another,” he said, “despite the constancy of both nature and human nature, is legible in music. Death, pain, and tragedy still rule the world, though in the rich countries of the West we insulate ourselves from them as never before in history. But when death, pain, and tragedy were as immediate as they were to everyone, even the privileged, in the time of Bach and Mozart, you have darkness and light coexisting with almost unbearable intensity. Which is why in all of these great pieces... you have the tension between the most glorious, sunny exultation, and the saddest and most beautiful mourning.”

I recalled recently about how terrifying it was as an 8-year old to consider there was a time before I was. Before I existed. That I was a state of nothingness with no consciousness. And I considered then the possibility that after this life there is no other and there’s a return to that nothingness.

The antidote is not to hold and grasp existence with a death-grip, as Christ cautioned against in saying that to lose our life would be to gain it. I am freed from terror from looking at the abyss of nothingness.

“What do I have that you you pursue my friendship?”... (Lope de Vega)

Nothing you have attracts God, and by the nothing, you have everything; for in you having nothing he is drawn by love to give you everything.