Sitting in the quintessential millennial hang out, the coffee shop, in the quintessential millennial Cbus neighborhood, the Short North. It’s like a micro vacation with none of the financial hangover. “Roaming Goat” it is, right next door to ye olde new bookstore. Sipping a rich roast coffee and feeling a bit out of place, like a 40-year old at a fraternity party. Found a table in back; a bit light on natural light but pleasant.

It’s not my natural habitat as shown by a painting above me of the Holy Roman emperor of the Democrat party, Justice Ruth Bader Ginsberg. The title of the work is, appropriately, “Blessed Be Thy Name”. One might append, “devoted custodian of the sacrament of abortion”.

A gray November day, as appropriate for Ohio in November as could be cogitated: cloudy, windy and 46 degrees. A weather cliche. Good weather inasmuch as it’s somehow more appropriate that we give thanks in a time of year in which thanks is not a ready sentiment. Just as they say the time you most need to pray is when you don’t feel like it, one should practice giving thanks when it’s not sunny and warm and you’re on a beach. 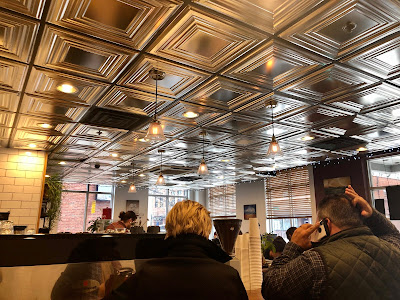 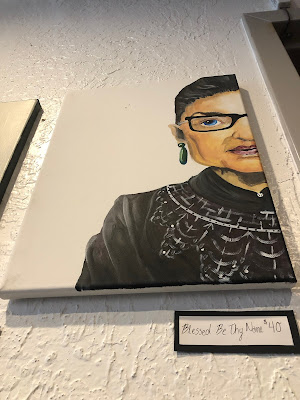 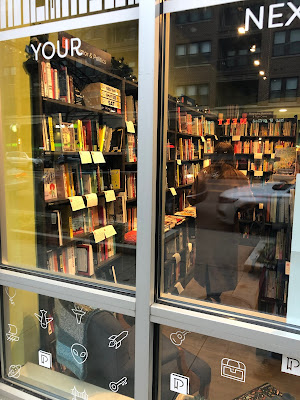 While I’m here, the melange of thankful entries on my workplace’s bathroom window (click to enlarge): 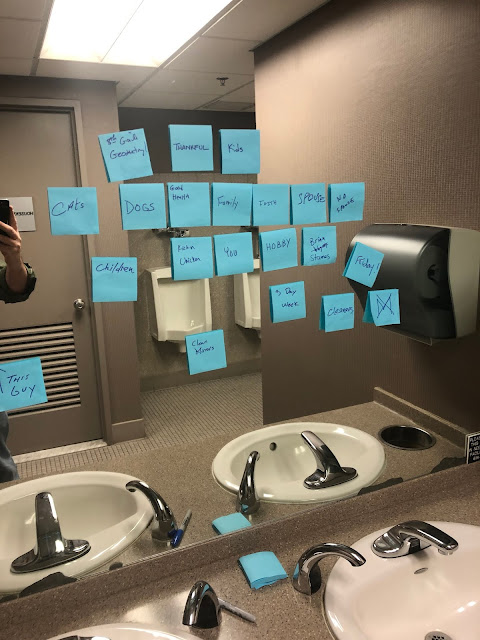 I think there are certain Beltway types who are smitten by ritual and by "historic" proceedings, even if the substance is banal. Peggy Noonan seems to have fallen under this particular trance given her eagerness to boast "What I saw at the Impeachment Trial" (to paraphrase her first book title). Rarely have we seen Noonan so captured by the Beltway bubble and bauble, so taken by the petty.

The problem for her, no doubt, is that politics is too small these days. Giants of the ‘80s like Reagan, Tip O’Neill, Daniel Patrick Moynihan have morphed into the midgets of the ‘10s: Schiff, Trump and Jordan. It’s not Peggy’s fault per se, but giving this impeachment the time of day seems a waste of her talent. The massive squander of time and energy on a question that was known since the transcript came out, on whether there was quid pro quo, is as astonishing as it is silly. The only interesting question is the one rarely asked: exactly how wrong was it? I don’t think it rises to the level of impeachment.

The only surprise in the whole affair is it took three years to catch Trump in something half-way impeachable. A babe in the woods, a complete neophyte in politics who didn’t understand the game, he was invincibly ignorant of the fact that the unelected spy agencies have at least as much power as the president and more if you consider that they can take out a president far more easily than vice-versa.

Ultimately what was done to Trump was far worse than what he did. If the press had any credibility at all they’d be more outraged at the mortal sin of the years-long Russia probe than of Trump’s venial, venal phone call. More sinned against than sinning is Trump, at least while he’s been in the White House.
Posted by TS at 8:33 PM 3 comments:

I worry that Trump has greatly accelerated media decadence, that he’s driven them mad and has exposed them to the point where they no longer "self-identify" as journalists anymore.

No longer in a state of “journalistic grace” they’ve easily transitioned to “advocate sinners”, having long been tempted in that direction anyway. It's getting to the point where if the press said the sky is blue I’d believe it wasn’t.

Because in the time-honored D.C. way, a gaffe/hot mic revealed the truth. TV reporter Amy Robach vented on having the goods on Epstein three years ago but the ABC honchos suppressed the story because apparently too many important and powerful people would get hurt, like the Clintons, Alan Dershowitz, and a prince in England. Because, as we know, the role of the press is to protect the powerful and preach to the powerless (especially Trump voters). The irony of Buckingham Palace having veto power over ABC stories is that we once fought a war to end monarchical rule.

And of course Robach stepped back from her brush with the truth and docilely toed the corporate line just as she did three years ago when she withheld the information from other news outlets or the police because, as we know, the role of the press is to get scoops, not give them. Apparently she felt no moral obligation given that Epstein could claim more victims in the meantime.

ABC laughably professed not having sufficient information for a story on Epstein never mind having had nothing on Justice Kavanaugh but eagerly feeding off wild-eyed allegations for days. (As one columnist said, "Whatever the liberal elite wants printed is propaganda; whatever it wants suppressed is news.")

They found out who apparently leaked the video and arranged to have the staffer fired even though he/she now works for CBS. “Professional courtesy” said CBS. They might’ve added, “After all, we’re all on the same team here, to propagandize for liberalism.”


The Epstein story is not the most important story of the year but it’s highly symbolic and telling. That he could get killed in a detention center and there be no leads or media curiosity? It’s like the Jimmy Hoffa story only it all occurred in public.  But little cracks are beginning to form in the cover-up, little slow leaks of truth. Despite the press.
Posted by TS at 3:50 PM No comments:
Newer Posts Older Posts Home
Subscribe to: Posts (Atom)