A poet has no apostolic authority, and his prophecy is by intuition and sensibility to tradition; but when he is true to the truth, aesthetics burnishes his metaphysics and gives him the mantle of an evangelist. - George Rutler, via Scipio of "Credo ut Intelligam"

I’ve increasingly stopped caring what happens on mainstream American campuses...My alma mater, Georgetown University, now has more members of its English department with specialties in film-making than it has members with active specialties in any recognizable field of literature. Unfortunately, the pattern extends beyond academia. I’ve begun to skip over the obligatory articles in the New York Times about the oppression of homosexuals or women or racial minorities somewhere in America. I skip over the obligatory articles in the Washington Times about how a radical anti-American agenda is being sold in the name of oppression of homosexuals and women and racial minorities somewhere in America. I ignore everything in the Nation, and I ignore all the pieces in the conservative press that Midge Decter once said should be titled “The World Is Going to Hell in a Handbasket; Let Me Count the Ways.” Mostly I look at the pictures, and I turn the pages. Maybe I’ve just gotten too old to stoke the fires of outrage anymore. The cost of aging, Matthew Arnold once wrote, is not that we no longer feel, but that our emotions are things so much less intense than they used to be. We are condemned to “feel but half, and feebly, what we feel.” But repetition is also a cause of feeling’s decline. Who cares anymore about all that stuff? The culture wars are over, ended by terminal boringness...No one is left to persuade, one way or the other, and the way things are now is pretty much what we’re going to be stuck with for a long time to come. - Jody Bottum of "First Things"

As I was driving to South Bend yesterday, I listened to a bit of Al Kresta's show.It was sort of Open Mike Monday, I guess, with the two major topics being Gospel of Judas/DVC and immigration. I was struck by the high quality of the discussion on immigration. People calling in seriously concerned that the impact of new legislation might be to create a perpetual indentured servitude class, that there really are issues of justice when people coming to this country are coming from places where they make $350 a year, but at the same time concern for the motives and policies of the Mexican government on this score. Puzzlement as to why the employer end of this issue is not the priority, along with securing borders. No screaming, an attempt to put it all in the framework of morality, law and pragmatism - as opposed to much of what I hear on this - an attempt to search for light, rather than simply generate heat. - Amy Welborn

When I was a Protestant, I noticed that the Catholic world was one of extremes: extreme holiness, and extreme, well, sub-holiness. The best Christians I knew were Catholics, as were the worst. I think traditional Catholicism magnifies this phenomenon by 10X or more. As a convert I still cling to my old protestant mediocrity, but I'm very fortunate to be surrounded by traditional Catholics who really want to be saints - and who, in my opinion, are well on their way. - Jeff of "Hallowed Ground" (obligatory disclaimer: opinions expressed in STG do not always reflect the management's)

The people I've met who support the indult Mass encourage me to think that it is, overall, a very BAD idea to allow a universal indult. They have been harsh, rude, condescending, self-righteous, holier than thou, more Catholic than the pope, and read to take umbrage at any sign of disagreement or cavil. This has been almost to a person. The only people I've found consistently more difficult to communicate with have been the Catholic Apologists in the local area. And when the apologist is a traditionalist, it's like plutonium constantly at the edge of critical mass. - Steven of "Flos Carmeli" (see disclaimer above; I just like controversy)

A man running a booth (pop a balloon with a dart and get prize) tried to get Mrs. Curley to play. I was lagging behind with 4 of the kids, Mrs. Curley had 3. He called her over and said, "3 darts for 2$-but I will give you a deal. How many kids do you have?" She replied, "7". The expression on his face changed. Mrs. Curley followed up with, "That sort of changes your deal right?". He nodded as Mrs. Curley moved on. - Jim of "Bethune Catholic" 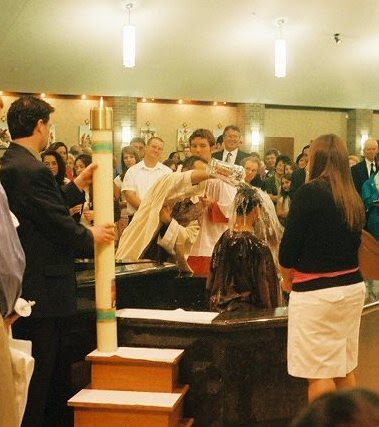 My oldest son, dropped a pan from the top of the fridge onto my new glass top oven and smashed it. I hadn't even had it a month. I frequently tell my children that we should just have a "Smash-a-thon" and get it over with. Let's get all of the things I love and hold dear, like my grandmother's china, and the crystal vase I got as a wedding present, and let's just smash them all at once and get it over with instead of breaking one heartbreaking piece at a time...The kids hate it when I mention the "smash-a-thon" and honestly my need to speak of it has diminished some over the years. Of course, so have the breakable items. - Elena of "My Domestic Church"", sounding Erma Bombeck-ish

In the household of God, I’m the one crashing on the couch. - title of Camassia post

We go from holding hands to just shaking hands over the course of a few minutes. Just follow the trend and it's no surprise that by the time we get in our cars, we're all strangers again. - Terrence Berres, on his welcoming parish

As my father lay dying in the hospital earlier this year, the prayers of the chaplain-priests were great comforts to my family and, more importantly, of lasting comfort to him...One priest took my confession in that tiny hospital room, and when I asked him to receive it, he acted as though it were the most natural thing in the world. God bless those good men...The archdiocese had just launched its "Future with Fewer Priests" campaign, and this catechist dutifully reported how we were going to have to learn to live with and in that future. "You may have heard about Catholics wearing medallions saying 'please call a priest' in the event they are taken to the hospital; those days are coming to a close." I volunteered that, no, we need not learn to live with it, and that efforts around the country were bearing vocational fruit. Since I had recently prepared an editorial for the Enquirer on the subject, I was able to share success stories from places like Lincoln, Peoria, Denver, Wichita and Chicago. We must never throw in the towel and "learn to live" without priestly icons of Christ. This Holy Thursday, pray for priests. - Rich of "Ten Reasons"
Posted by TS at 1:35 PM