Well, today, fresh off the press is a four-page type-written reply addressed to that third of the Byzantine parish who asked that Easter be celebrated not at 10pm Saturday night but on Easter Sunday morning. It's to be printed in Sunday's bulletin.

I spilt many pixels on this subject to my interlocutor, and these are pixels that I can never get back again. He called it "the Great Debate"; I suggested our next debate be: "Do debates ever change anyone's mind, or simply lock each in their opinion more firmly?" Now there's a worthwhile debate.

I got the four-page letter surreptiously from a friend of a friend who's on the parish council and who asked that this not be forwarded to anyone outside the continental U.S.. I told him other than a quick forward to Drudge, mum's the word.

I was disappointed by the lack of invective in Father's letter. A quick word search revealed no hits for "crybabies", "whining" or "wussies". I could never be a pastor.

Instead he talked about the bishop's directive that unity be preserved by having only one Easter service for those whose church buildings can accommodate the full parish, and by the dramatic symbolism of candles in the dark which recall the first chapter of the gospel of John. There was mention made that no registered parishioner had expressed concerns about the 10pm liturgy to him. (It looks like "The Letter" was the first hint.)

But all's fair in love and Pascha liturgies. I say next year we get protest signs and march up Cleveland Avenue and then set up a picket outside the rectory. After all, Americans have the right to life, liberty and Easter Sunday services. 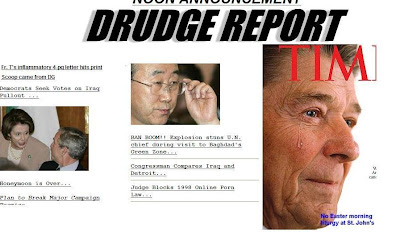