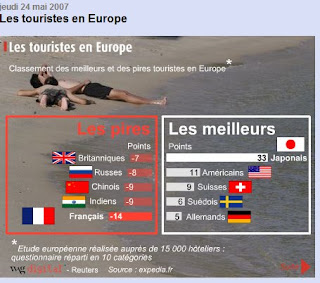 A poll of 15,000 hotel workers found that the French are the worst guests and Americans the second best, after the Japanese.

Very predictable list of countries. Who would not have predicted that an Asian country would be the best and French the worst?

The least complaining workers were number 1 Netherlands and 2 Thailand tied with Ireland.

You would think the higher the morale the less complaining and that's true. But the lower morale doesn't correspond to higher complaining. Japan has the worst morale and Germany second-worst and yet aren't among the complainers. The Germans and Japanese still have that sense of duty about them, don't they? They are the predictable stoics - you can see that by the unimaginable levels of casualties they almost casually endured during the horrific wars of the last century.

* * *
A professor and registered Democrat says: Americans hate their fabulous economy
Posted by TS at 3:18 PM