Not Your Father's TV Shows?

I have low expectations of television dramas, especially regarding matters spiritual. But I'm take aback by how a couple of shows are so different from any show from the '70s, so anti-Pelagian if you will. I'm speaking of My Name is Earl and Journeyman. In both cases the protagonist helps people, but what is so different from the '70s shows is they are not in control.

Dan, the main character of Journeyman, travels back in time to help people but there are typically two problems: one, he can't turn on and off his power: "God" transports him back and forth in time at His will. And two, it's not always exactly clear who it is Dan is supposed to help. Dan still has a free will in the sense that he struggles with who to listen to while on a journey: God's quiet voice, often in the form of his fellow time-traveler's wisdom, or his own desires, including the desire to change his own history. 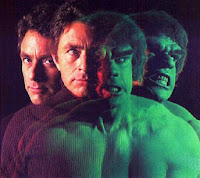 Compare this to, say, The Incredible Hulk. The Hulk was a creature of material processes in the form of an overdose of gamma radiation, not divine intervention (although we certainly don't know for a fact that Journeyman's journeys are divinely-inspired so I'm probably jumping the gun here - but it's obvious that an intelligence of some sort is actively controlling Dan's journeys). Dr. Banner of the Incredible Hulk could trigger his superpowers by getting very angry, and the Hulk knew who to pulverize with his green "ID" sense of justice.

Earl in My Name is Earl has found that free will is free but has consequences. Years of criminal behavior has led him to make a list atoning for every crime by making something right for each victim. 'Karma' is television's non-threatening label for God, or at least Earl's, and karma intervenes enough (although generally with great subtley) that Earl will often speak to it, asking what it wants. Earl knows he is not in control: when he works to strike someone from his list he'll sometimes find out in the course of it that he was actually supposed to help someone else on his list. Or he'll find, as in a recent episode, that karma can work through him even when he thought he'd made a mistake.
Posted by TS at 7:44 AM